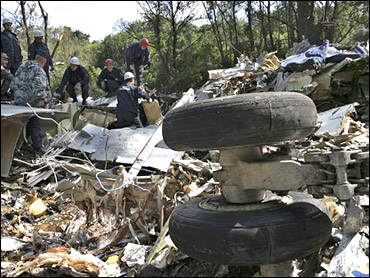 One of two Russian airliners that crashed nearly simultaneously was brought down by a terrorist act, officials said Friday, after finding traces of explosives in the plane's wreckage. An Islamic militant group claimed responsibility for the attack in a Web statement.

The planes, with 90 people aboard, went down within 20 minutes of each other Tuesday night. In Washington, White House spokesman Scott McClellan said there was "mounting evidence" that both crashes "were acts of terrorism."

Traces of the explosive hexogen were found in the remains of one of the planes, a Tu-154, security service spokesman Nikolai Zakharov said. No results from the investigation of the other crashed plane, a Tu-134, have been announced.

"According to preliminary information, at least one of the air crashes ... has been the result of a terrorist act," a spokesman for the Federal Security Service, Sergei Ignatchenko, the ITAR-Tass news agency reported.

The Tu-154 was carrying 46 people when it crashed en route to the Black Sea resort of Sochi. The other flight had 44 people aboard, heading to the southern city of Volgograd, when it went down.

Hexogen, the explosive found in the Tu-154, is the material that Russian officials said was used in the 1999 apartment bombings that killed some 300 people in Russia, an attack blamed on Chechen separatists.

CBS News consultant Paul Duffy, a Moscow-based pilot and former head of the civil aviation authority in Ireland, says very little hexogen would be needed to down an aircraft.

"Maybe a quarter pound to half a pound — If you're sitting beside the fuselage skin, that'd be all it would take," Duffy said.

Despite the suspicious timing of the crashes and the fact they took place five days before an election in Chechnya opposed by separatists, Russian officials had kept open the possibility they were caused by bad fuel or human error.

A Web site connected to Islamic militants published a statement on Friday — signed the "Islambouli Brigades" — claiming responsibility for the crashes. The statement's authenticity could not immediately be confirmed.

The statement said five "mujahedeen" — holy fighters — were aboard each plane. It said the two planes were downed as part of a series of operations "to extend support and victory to our Muslim brothers in Chechnya and other Muslim areas which suffer from Russian faithlessness."

The Federal Security Service declined to comment on the statement.

Friday's claim did not refer to al Qaeda, but a group called "the Islambouli Brigades of al Qaeda" claimed responsibility for last month's attempt to assassinate Pakistan's prime minister-designate.

Lt. Khaled Islambouli was the leader of the group of soldiers who assassinated Egyptian President Anwar Sadat in Cairo in 1981.

CBS News Correspondent Richard Roth says investigators believe a woman was likely responsible - wearing an explosive belt that could have passed through security undetected unless she was frisked. Women in Russia rarely are.

Russian officials said they were investigating two female passengers — one on each plane — with Chechen names. The two were the only passengers whose relatives did not contact authorities, officials said.

Female suicide bombers with alleged Chechen connections have carried out attacks in Moscow, including the twin bombing of an outdoor rock concert and another blast outside a hotel adjacent to Red Square.

Both planes took off from Moscow's Domodedovo airport, one of Russia's most modern and sophisticated. It was not immediately clear how airport security systems could be circumvented to smuggle in explosives.

Duffy tells CBS News the planes were parked side-by-side and serviced by the same crew. The same clerk checked in the passengers to both flights.

Although Friday's developments raised security concerns for the airlines that crisscross the sprawling country, Russia did not order a halt to air traffic, as the United States did after the Sept. 11 attacks.

Chechens on Sunday are to vote for the republic's president, to replace Kremlin-backed Chechen president Akhmad Kadyrov, who was assassinated in a May 9 bomb attack.

Officials had warned that Chechen separatists might try to carry out attacks ahead of the vote, which is part of the Kremlin's attempts to establish a modicum of civil order in the region and undermine separatist rebels.

A Chechen connection to the crashes would be likely to further harden the Kremlin's already-stony refusal to negotiate an end to the war, as well as to expose weakness in its strategy.

"Here's the answer to how effective our politics in Chechnya have been," Russian legislator Vladimir Ryzhkov was quoted as saying in the newspaper Novaya Gazeta.

"The government will now be able to say that the fight against separatists in Chechnya comes under the roof of international terrorism. As soon as they say that, you can forget about human rights in the region," he said.

Details of how the planes were destroyed remained incomplete. News reports said at least one of the planes sent a distress signal indicating a hijacking shortly before it disappeared from radar screens.

Victims' families began holding funerals Friday, including for Tengiz Yakobashvili, a dual Russian-Israeli citizen. "He helped many people and he did it quietly," Rabbi Shmuel Kuperman said at his funeral in Moscow.