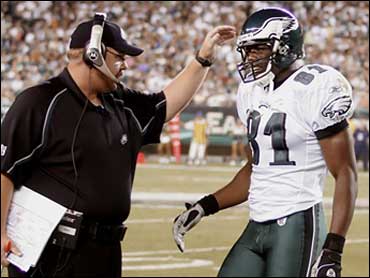 Terrell Owens was shut down completely: his grievance, his time with the Philadelphia Eagles, his season.

For conduct proven to be a "destructive and continuing threat" to his team, an arbitrator ruled Wednesday that the Eagles were justified in suspending their All-Pro receiver for four games — and are within their rights to deactivate him for the rest of the year.

The Eagles will now look to trade or release Owens before next March, when he's due a $5 million roster bonus.

Arbitrator Richard Bloch wrote in his 38-page decision that there was "no violation of the labor agreement inherent in the club's decision to pay Mr. Owens, but not to permit him to play or practice due to the nature of his conduct and its destructive and continuing threat to the team."

After the ruling, the Eagles released a one-paragraph statement thanking Bloch for considering the matter and saying Philadelphia is looking forward to "moving on with our preparations for Sunday's game vs. Green Bay and the rest of the 2005 season and will have no further comment on this issue."

Bloch heard more than 13 hours of testimony last week. Owens' side argued the penalty is excessive and the Eagles' decision to deactivate him is too severe; he had sought to be reinstated or released so he can sign with another team.

"We are obviously very disappointed with Arbitrator Bloch's decision," players union general counsel Richard Berthelsen said in a statement. "His ruling ... ignores the obligation a club has to either provide employment to a player or allow him to play somewhere else. We are confident that we put in a winning case at the hearing last Friday, and we still believe Terrell Owens had a right to a legitimate reinstatement."

NFL head of labor relations Harold Henderson said the league was "pleased that the arbitrator has upheld the right of a club to suspend a player for conduct detrimental to the club."

Owens was suspended Nov. 5 after he again criticized quarterback Donovan McNabb, called the organization "classless" and fought with former teammate Hugh Douglas. Two days later, the Eagles extended the suspension to four games and told Owens not to return.

The reigning conference champions are 0-3 without Owens and 4-6 overall, last in the NFC East.

"We're trying to concentrate so hard because we know it's there, we're not being ourselves," said defensive end N.D. Kalu. "It just got to the point where it's just frustrating. We're playing the Giants, we're playing Green Bay, but yet we're talking about a guy who's not here. Most of us like him, but we're not supposed to like him, so you've got to watch how you answer the questions."

Some players, including Pro Bowl linebacker Jeremiah Trotter, said they wanted Owens back, but coach Andy Reid and management stuck by their decision.

"T.O. has friends on the team, so they're going to feel for T.O. and like him," Reid said before the decision was announced. "I expected guys to come talk to me. Jeremiah, being one of the leaders, did that. I didn't have a problem with it."

Owens has five years remaining on a seven-year, $48.97 million contract that he signed when he came to Philadelphia in March 2004. His problems started when he demanded a new contract after an outstanding season in which he caught 77 passes for 1,200 yards and 14 touchdowns.

He took his first verbal shot at McNabb, suggesting the five-time Pro Bowl quarterback was tired in the fourth quarter of the Super Bowl loss to New England.

McNabb responded harshly and the two didn't speak for a prolonged period in training camp. They briefly reconciled their relationship and performed well together on the field — Owens had 47 catches for 763 yards and six TDs in seven games.

Owens earned a one-week exile from training camp after a heated dispute with Reid that followed a shouting match with offensive coordinator Brad Childress.

One day after the Eagles told him to go home for good, a contrite Owens apologized to McNabb, Reid, the team's owner and president, and fans.

"I fight for what I think is right. In doing so, I alienated a lot of my fans and my teammates," Owens said, reading a statement outside his house outside Philadelphia.

was making a public apology (video)
in hopes of returning to the Eagles immediately.

The team was unmoved.