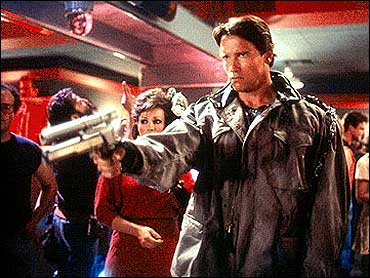 An invincible robot, an invisible man, a pacifist soldier, and a group of adventurers fighting for their lives in the wilds of the American South are just some of the memorable movie characters that have been deemed worthy of preservation.

The Library of Congress announced it is adding 25 films to the National Film Registry, a compendium of motion pictures that have been judged to be culturally, historically or aesthetically significant.

Among the Hollywood classics added to the Registry today are "The Asphalt Jungle," "Deliverance," "A Face in the Crowd," "In Cold Blood," "The Invisible Man," "Sergeant York," and "The Terminator."

In naming this year's inductees, Librarian of Congress James H. Billington called the Registry "a matchless record of the amazing creativity America has brought to the movies since the early 1890s."

Not simply a "best of" list, the National Film Registry is meant to focus attention on movies from studios, independent and amateur filmmakers, journalists, government agencies and advertisers that have demonstrated their value in an historical sense.

In addition to timeless classics like "Gone With the Wind," "The Godfather," "Duck Soup" and "2001: A Space Odyssey," the Registry also includes experimental films by artists like Maya Deren and Godfrey Reggio, cartoons by Chuck Jones, and the infamous 8mm film shot by Abraham Zapruder of the assassination of President Kennedy.

But they also show a diversity of filmmakers. Among the titles added this year are "Hallelujah" (1929), the first MGM film with an all-black-cast; the Rodgers and Hammerstein musical "Flower Drum Song" (1961), which featured Asian actors in the leads, also a rarity for Hollywood; "The Pawnbroker" (1965), which brought the trauma of the Nazi concentration camp front-and-center in the drama of a Holocaust survivor; and "White Fawn's Devotion," a 1910 drama by James Young Deer, the first documented Native American filmmaker.

For the past 20 years, film professionals, historians, critics and the public have nominated films for the Registry, with the final choices selected by Billington. The latest additions bring the total number of titles on the Registry to 500.

One of the goals of the Registry is to spearhead preservation of motion pictures. Under the National Film Preservation Act, the Library of Congress works with studios and archives to make sure copies of movies on the Registry are protected and saved for future generations.

This is crucial because more than half of motion pictures produced before 1950, and as much as 90 percent of films from the Silent Era, are lost - their negatives discarded, destroyed by fire, or deteriorated into dust. The fading of color film stocks has also imperiled movies dating from the 1950s through the '70s.

"Both as a public awareness tool and an educational learning aid for students, the Registry helps this nation understand the diversity of America's unmatched film heritage and, just as importantly, the need for its preservation," said Billington.

The titles added this year are:

"Deliverance" (1972), a terrifying journey into a Gothic South based on James Dickey's novel, features Burt Reynolds, Jon Voight and the memorable "Dueling Banjos."

"Disneyland Dream" (1956), a color home movie by a Connecticut family documenting their California vacation won in a sweepstakes - an example of the cultural importance that film and video has had in recording American life.

"A Face in the Crowd" (1957) stars Andy Griffith as a media-created celebrity easily corrupted by the power brought about from his new-found fame.

"Foolish Wives" (1922) stars director Erich von Stroheim in an elaborate tale of a womanizing criminal masquerading as a Russian count.

"Free Radicals" (1979) is an example of avant garde filmmaker Len Lye's direct-to-film work, in which he scratched lines and diagrams straight onto the film emulsion, creating abstract visuals set to the music of the Bagirmi Tribe of Africa.

"Hallelujah" (1929), directed by King Vidor, features an all-black cast (unheard of among major studios at the time).

"In Cold Blood" (1967), adapted from Truman Capote's bestseller about the mass murder of a family in Kansas, is a stark, luminous tale made more memorable by director Richard Brooks' documentary style, the black-and-white cinematography of Conrad Hall, and Robert Blake's haunting performance.

"The Invisible Man" (1933) introduced Claude Rains to American audiences, though they couldn't truly see him, thanks to the ingenious special effects work used to depict H.G. Wells' maniacal scientist.

"Johnny Guitar" (1954) pits Joan Crawford against Mercedes McCambridge in Nicholas Ray's Freudian Western that was a favorite of the French New Wave school of directors.

"The Killers" (1946) stars Burt Lancaster and Ava Gardner in a classic film noir adapted from an Ernest Hemingway short story.

"The March" (1964) is a behind-the-scenes look at the 1963 Civil Rights March on Washington, produced by the United States Information Agency.

"On the Bowery" (1957), Lionel Rogosin's documentary about Skid Row, was heralded for its uncompromising portrayal of three down-and-out denizens.

"One Week" (1920) was the first publicly-released two-reeler starring Buster Keaton, in which he and his bride attempt to assemble their pre-fabricated home.

"The Pawnbroker" (1965) stars Rod Steiger in Sidney Lumet's harrowing character study of a Holocaust survivor wrestling with his own prejudices in contemporary urban America.

"The Perils of Pauline" (1914), the first American movie serial, depicts the travails of an heiress fending off attempts to steal her fortune. Pearl White not only portrayed a strong female character through 20 episodes, she did many of her own stunts to boot.

"Sergeant York" (1941), directed by Howard Hawks, is the true story of a pacifist drafted into service in World War I who single-handedly captured more than 130 German soldiers. Gary Cooper won his first Academy Award for his performance.

"So's Your Old Man" (1926) stars W.C. Fields in a serendipitous amalgamation of slapstick typical of the rascally comedian.

"George Stevens World War II Footage" (1943-46) was photographed by the Hollywood director (whose hits included "Swing Time" and "Gunga Din") while he headed the U.S. Army Signal Corps' motion picture unit. Stevens documented the Allies' march across Europe and the liberation of a Nazi labor camp - remarkable color footage that later turned up in the revealing "George Stevens: A Filmmaker's Journey."

"The Terminator" (1984), director James Cameron's original sci-fi tale about an android from the future sent to kill a woman destined to give birth to humanity's savior, spawned sequels as well as a catch-phrase ("I'll be back") that became Arnold Schwarzenegger's best-known.

"Water and Power" (1989), an experimental "city symphony" juxtaposing images of Los Angeles with scenes of its sources of water and energy, won Pat O'Neill a Grand Jury Prize at the Sundance Film Festival.

"White Fawn's Devotion" (1910) is one of as many as 100 films that Native American James Young Deer directed for the French company Pathe, which sought more authentic Western films. Fewer than 10 of Deer's films have survived.