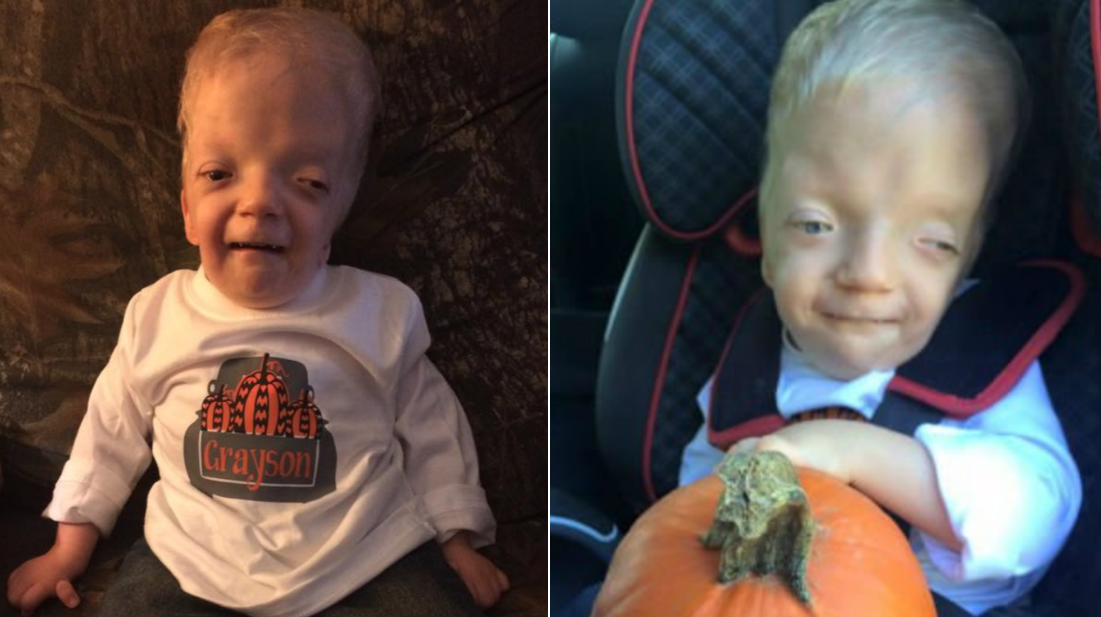 As soon as her tiny baby boy was born, Jenny Smith knew something was wrong.

She could see it in the doctors’ faces, and she could hear it in her newborn son’s weak cry. Before the small-town mom from Ranburne, Alabama, could even hold newborn Grayson, doctors were whisking him away to a medical center in Atlanta, Georgia.

It was there she found out her baby was diagnosed with an array of serious problems: occipital encephalocele, craniosynostosis, micronathia, thumb hypoplasia, a cleft palate, hypospadias, congenital anomalies of the lower limbs, ASD of the heart, apnea, and he did not appear to be able to hear or see.

“They aren’t all terminal diseases,” Smith explained to CBS News. “But combine them all together... no other children compare to him. He’s the only child with all of these conditions combined.”

Doctors gave Grayson a week or two to live, at best. Soon he was sent home on hospice care.

Three and a half years and 24 head and brain surgeries later, Grayson is a chatty pre-schooler who loves Mickey Mouse and the noise of drag races. He’s only the size of a one-year-old, but his personality make him seem much older than he is.

“It’s so capturing, because he’s so sarcastic and so smart. It’s almost like he’s a little man trapped in a baby body,” Smith said.

The Smith family of six are taking things day by day.

“We could wake up one morning and he could be gone,” Smith said. “[Doctors are] actually shocked that he’s made it this long and doing as well as he is. They always tell us, ‘Keep in the back of your mind that he may just never wake up one day.’”

To help cope with her child’s illnesses, Smith turned to Facebook for support. She set up the “Grayson’s Story” page to chronicle Grayson’s journey and to connect with other parents who are going through similar situations.

Her Facebook page has gained nearly 15,000 followers over the years and the family has received a flood of support. But like many popular public pages, it’s also attracted some trolls. And Smith learned just how cruel the internet can be.

Within the past few weeks, Smith has repeatedly seen a meme circulating online using a photo of her son to make an ugly joke.

It says, “That face you make when your parents are actually cousins.”

Smith was horrified when she Googled the meme and found out just how many pages had posted it.

“I just can’t believe that there are people out there who would use a child, especially anyone who has been ruled terminally disabled, like that,” she said. “It really just hit home with me.”

At first, Smith wanted to delete Grayson’s Facebook page and “hide under a rock,” but then she decided that’s not what her son would want.

“He’s not that type of kid; he would fight back,” Smith said.

So, one by one, Smith began contacting the pages to ask them to remove the image. Some sites have complied, while others argued.

“Some people think it’s funny, but I don’t find humor in hurting someone else for a laugh,” Smith said. “Honestly, I’m just so ashamed that people actually find it to be entertaining. It’s disgusting.”

In the end, Smith said there’s a lot more good than bad in the world.

“The support we’ve felt is overwhelming,” Smith said. “We have to stick together and fight back. We’re not the first family that’s been through this and we’re not going to be the last.”