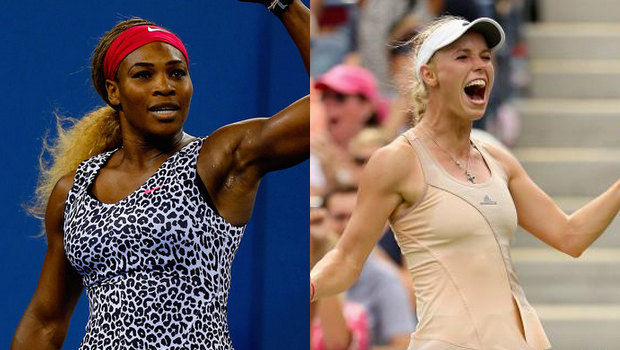 If Williams can make that 21 in a row by beating Caroline Wozniacki in Sunday's final, the 32-year-old American will become the first woman since Chris Evert in the 1970s to win three consecutive titles at the tournament.

After Makarova held to 1-all, she went 40 minutes until taking another game. Powered by swift serves and stinging forehands, Williams grabbed nine straight games, including a truly dominant stretch in which she took 22 of 24 points.

All in all, Williams' semifinal was far less dramatic than Friday's earlier match, when the 10th-seeded Wozniacki's opponent, China's Peng Shuai, retired in the second set because of heat illness and left the court in a wheelchair.

Wozniacki lost her only previous major final, at the 2009 U.S. Open. Williams, meanwhile, is seeking a sixth U.S. Open championship and 18th major singles title overall, which would tie her with Evert and Martina Navratilova.

"She obviously wants to win and go for her first Grand Slam," Williams said about her close friend Wozniacki. "I want to win a Grand Slam for some history."

This Grand Slam season has been rather poor by Williams' lofty standards, though: She lost in the fourth round at the Australian Open, the second round at the French Open, and the third round at Wimbledon.

"It feels so good. You never know. I am so happy - you have no idea," Williams said in an on-court interview. "I didn't think I'd be here today."

But over the past two weeks in New York, Williams has looked very much like a woman who is ranked and seeded No. 1, winning all 12 sets she has played. It might have helped that, because of a series of surprises, she faced only one seeded opponent until Friday, eliminating No. 11 Flavia Pennetta in the quarterfinals.

Makarova defeated No. 7 Eugenie Bouchard - the runner-up at Wimbledon in July - and No. 16 Victoria Azarenka - a two-time Australian Open champion and a finalist at the U.S. Open in 2012 and 2013 - to reach her first major semifinal in her 29th try. A terrific run, to be sure, but the lanky left-hander never stood a chance against Williams.

The whole thing lasted only an hour, and with her older sister Venus sitting in the stands, Williams compiled a 24-6 edge in winners.

In the first semifinal, when the temperature was in the high 80s (above 30 Celsius) and the humidity near 70 percent, Wozniacki was leading 7-6 (1), 4-3 when Peng was forced to quit. She began showing signs of distress early in the second set, clutching at her left thigh. During that set's eighth game, Peng clearly was in serious trouble.

In a scary scene at 30-all, the 28-year-old Peng paused, turned her back to the net and hopped to the back wall behind the baseline. She leaned and tried to stretch her right leg. She resumed playing there, and Wozniacki double-faulted. That's when Peng took another break and limped, with help from two people, to a shaded hallway just off the court to get checked by a trainer and doctor.

Peng was allowed a medical timeout, and Wozniacki practiced serving during what became a 10-minute, mid-game break.

When they returned to action, Peng could barely move. Still, she stuck it out for six more points. After shanking a return, though, she collapsed, with both knees and both palms on the ground.