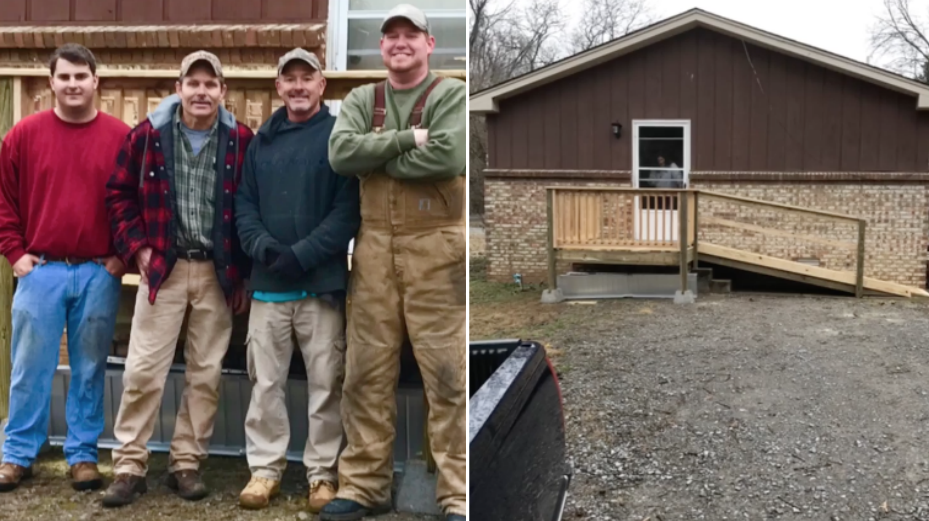 Some may call it chance, but Verna DeSpain is convinced fate led school bus mechanic Thomas Mitchell to her doorstep last week.

The mechanic from Clarksville, Tennessee, fills in as a substitute bus driver for the Clarksville-Montgomery County School System (CMCSS) when he’s needed. His route occasionally includes bringing a group of special needs children to school.

That’s when he first met DeSpain and her 10-year-old daughter, Lydia, a third-grader who uses a wheelchair. One morning, Mitchell noticed DeSpain, a single mother of two, struggling to carry Lydia’s wheelchair down the steps of their front porch.

For some reason, he just couldn’t shake the image from his head.

“There was just hardly any room for her to maneuver this wheelchair,” Mitchell told the school district, which posted the story on Facebook. “It just didn’t seem right for somebody to have to struggle like that.”

So, a few days later, he gave DeSpain a call and offered to build a customized wheelchair ramp for Lydia — free of charge.

“I was just so shocked,” DeSpain told CBS News. “I got a call from him out of the blue.”

It took several months to design and plan. Mitchell gathered tools, found a few friends to help and even got a local Lowe’s home improvement store to donate all the necessary materials.

One Sunday in late January, Mitchell knocked on DeSpain’s front door with four friends, including a construction worker, ready to follow through on his promise. Less than three hours later, the little girl got the ramp she needed.

“I thought it was going to be all day, so when he told me we were done I was just shocked and actually very impressed,” said DeSpain, describing the wooden ramp complete with a small fenced-in deck. “They went above and beyond what we were expecting.”

For more than a year, the mom had to guide her daughter down the steps in reverse using a basic portable ramp. At the time, it was all she could afford.

“It worked better than not having one at all, but we had to put it on the second step and it was flimsy,” DeSpain explained. “It wasn’t the best or the safest.”

In fact, DeSpain hurt her shoulder a few months back carrying her daughter.

But thanks to Mitchell and his friends, DeSpain will no longer have to worry about getting her daughter down the steps safely.

“I’m every thankful and grateful,” she said. “It’s a major blessing. This is the best year my children and I have ever had.”

“Everybody should be helping out their neighbor, and so many people just drive by,” he said. “So many people comment, you know, that it’s such a great thing. I challenge them to do the same. There’s no greater feeling.”