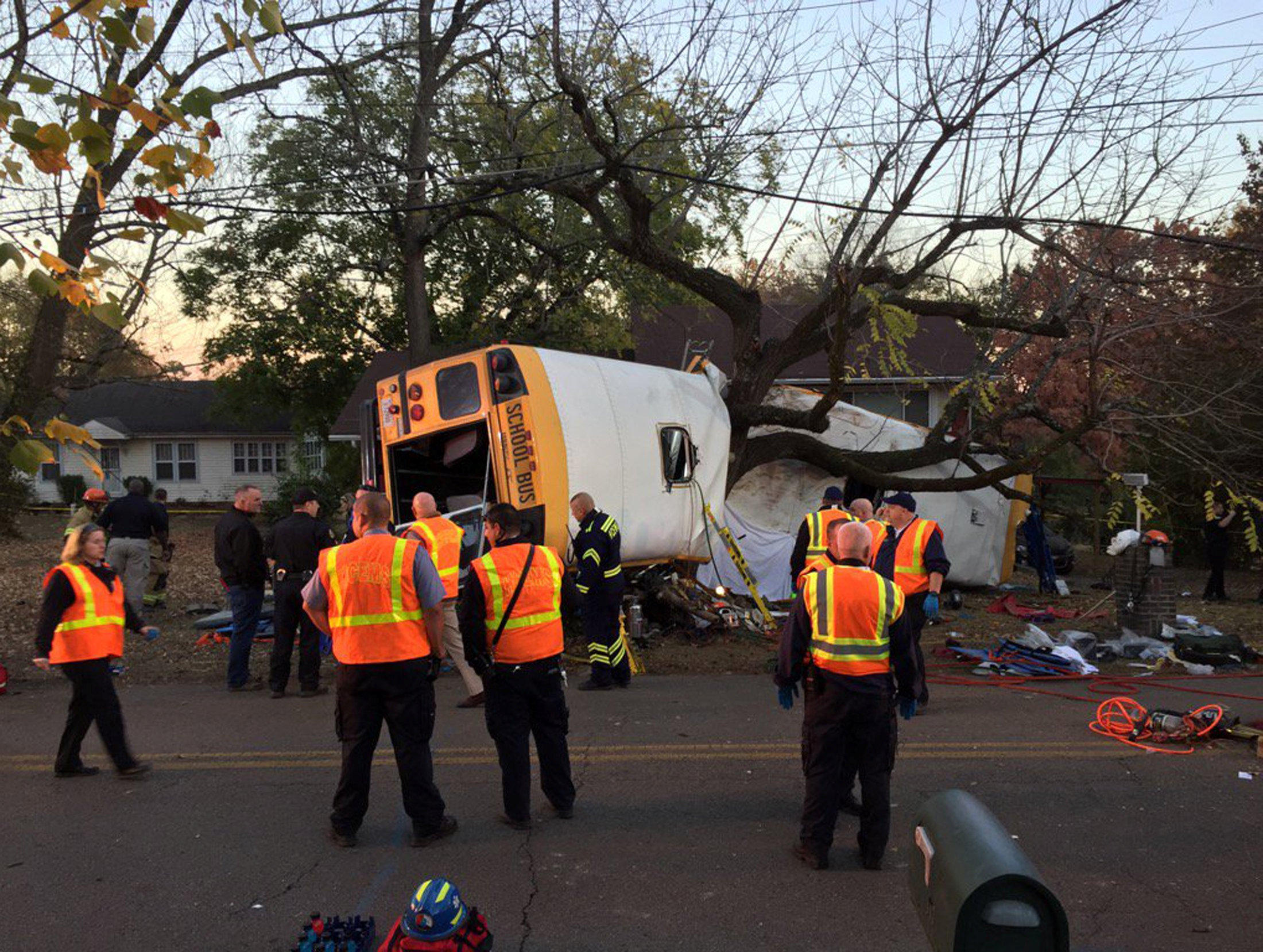 NASHVILLE, Tenn. -- A crash that in killed five children in Tennessee is reviving discussion over whether school buses - considered among the safest vehicles on the road because of their height and bulk - should also be equipped with seat belts.

Only six states require seat belts on large buses. Many others, including Tennessee, have considered but dropped such legislation in recent years out of concerns including cost.

Among those saying it is now time to reconsider is Tennessee state Rep. Joanne Favors, who responded to the scene of Monday’s crash in Chattanooga and was shaken by the sight of the yellow bus on its side, sliced through by a tree. Police say the driver, who has been charged with five counts of vehicular homicide, was speeding along a narrow, winding road when he crashed.

The bus did not have seat belts, and NTSB officials said it was too soon to know whether they would have made a difference.

Seat belt legislation introduced after two students and an aide died in a 2014 school bus crash in Knoxville did not make it out of committee, said Favors, a Chattanooga Democrat.

“I think it’s a bit asinine to not require that on school buses,” she said.

Costs explain some of the reluctance. Federal agencies have estimated the price of lap and shoulder belts at $7,000 to $10,000 per bus. But some say the design and conspicuous color of the buses keep children safe enough, with fatalities averaging only about five per year nationwide. Nearly 500,000 buses carry more than 25 million students daily, according to the NTSB.

“The children are protected like eggs in an egg carton - compartmentalized, and surrounded with padding and structural integrity to secure the entire container,” The American School Bus Council says on its website. “The seat backs are raised, and the shell is reinforced for protection against impact.”

Bus drivers themselves have raised concerns that seat belts could trap panicked or disoriented students in an emergency, such as a fire, and that it would be next to impossible to make sure that students keep their belts properly fastened, the National Education Association said after surveying its member drivers.

Until recently, federal regulators did not push the idea. That changed in November 2015 when National Highway Traffic Safety Administrator Mark Rosekind called for a three-point seat belt on every bus.

“I don’t deny that this is a challenge,” Rosekind said at the time. “But I want us to concentrate on this simple basic statement: School buses should have seat belts. Period. It should be utterly uncontroversial - there is no question that seat belts offer improved safety.”

The NTSB made the same recommendation for newly purchased buses after investigating crashes in which children were injured or killed - typically side-impact or high-speed rollovers where compartmentalization wasn’t enough.

Lawmakers in Indiana, where a bus carrying a high school basketball team was sideswiped and overturned on Interstate 65 in March, passed a resolution supporting a study of the issue. The 27 players and staff members escaped serious injury.

Tennessee Gov. Bill Haslam told reporters at the state Capitol in Nashville on Tuesday that he wants to have a wide-ranging discussion following the wrecks in Chattanooga, Knoxville and another in Nashville just last week.

“Anybody who saw anything of the Chattanooga situation yesterday, your heart is broken. It’s a tragic situation where you have little kids involved,” Haslam said. “I think that’s part of our job to come back and say, are we doing everything we can to ensure safety on school buses?”