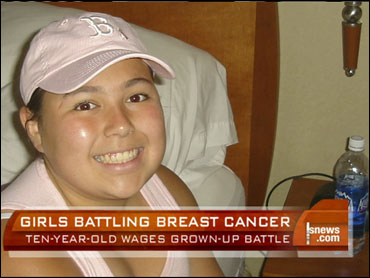 But in La Mirada, Calif., a ten-year-old is fighting the disease.

But Hannah says when she learned her diagnosis, just last month, she wondered, " 'How could this happen? I'm ten.' I was really shocked."

After Hannah felt a lump, doctors did an ultra-sound and discovered a tumor spanning nearly two inches. She has secretory carcinoma, a slow-growing cancer.

"The mass consists of both the solid component and also the fluid component, (which) we call the cystic component," surgical oncologist Dr. Helena Chang explained.

Both Hannah and her mom, Carrie Auslam, were shocked.

Hannah had a mastectomy. Now, her doctor says the cancer has spread to a lymph node, meaning more surgery or chemotherapy. But radiation is out.

"If you radiate the developing breast," Chang says, "it will never grow develop fully, because it becomes atrophic."

Hannah's family has launched a Website, OurLittleSweetPea.com, her softball teammates are flying pink balloons, and a local tattoo parlor is having a fundraiser this weekend -- all for the girl whose diagnosis stunned specialists.

But Chang observes, "I don't think there's anything on this earth will beat this little girl down. She is just so upbeat. And 'I'll do it. I'll figure it out.' And never have a down moment."

Hannah is so upbeat, Kauffman notes, she says God chose her for this experience, because he knows she's strong.

"I'm going to set an example," Hannah vows. "If there's something wrong with your body, you tell your parents."

A sentiment echoed on The Early Show Tuesday by Carrie, who urged parents to talk to their kids.

"If your kids feel something that's unusual about their body," Carrie said, "they need to talk to you. Hannah knew about her lump, she didn't talk to me, knowing that it was just part of growing up. She didn't think it was a big deal. And she had that lump for several months before I found out about it. I found out about it by accident. And it became a huge problem. So, when kids find something that's wrong with their bodies, they need to talk to their parents."

CBS News medical correspondent Dr. Jennifer Ashton agreed, stressing that, "When girls are going through puberty and their bodies are changing, there are a lot of changes, physical, social and emotional. It can be an awkward time. Trust your instincts. We have to teach our daughters to trust their bodies, to not be afraid to bring something to their parents' attention, to their doctors' attention. And likewise, for the parent to say to the doctor, 'This is not right. Please investigate it.' The statistics are only there in medicine to guide us. There are always exceptions."

Carrie described learning of Hannah's illness as "heartbreaking. Hurtful. I feel like she's been robbed of her childhood. ... It's beyond shocking. You know. She's 10. She has breast cancer. It's unheard of."