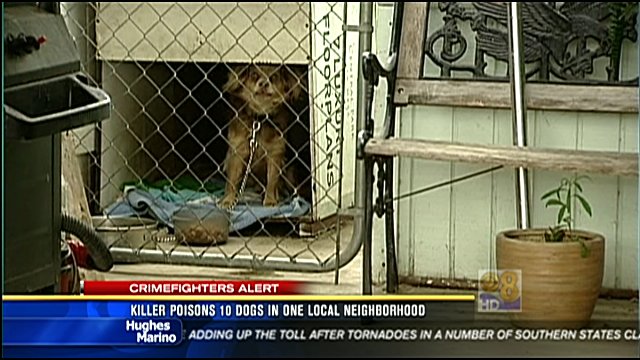 (CBS/AP) SAN DIEGO - Authorities are looking for a possible 'serial dog killer' after a rash of 10 fatal dog poisonings swept through a San Diego trailer park. On Monday, police asked for public assistance in what they say appears to be an animal cruelty case.

Humane Society officers say they found four dead dogs when they arrived at the El Rey Trailer Plaza on Saturday, and saw another die in front of them. Five more dogs have turned up dead since then. All of the poisoned animals have reportedly been small breeds such as terriers and chihuahuas.

The dogs experience convulsions and foam at the mouth before expiring, authorities say. Medical staff are running toxicology tests on the animals this week, but the results may take several weeks.

"The severity of the animals' conditions leads us to believe that this is a case of intentional animal cruelty," Randy Lawrence, the San Diego Humane Society's director of investigations, told the San Diego Union-Tribune.

The dogs were often allowed to run freely through the fenced in 220 unit trailer park, reports the Tribune. Investigators are now focusing their attention on the trailer park residents.

"We do believe someone probably got tired of the dogs running around," Lawrence said.

Anyone with information about the case is asked to call San Diego County Crime Stoppers at (888) 580-8477, or e-mail the agency at sdcrimestoppers.com. Tipsters may remain anonymous and could be eligible for a reward of up to $1,000.