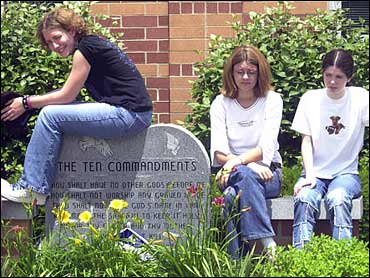 Dozens of protesters locked arms and knelt in prayer Monday to hinder workers who had been ordered to remove giant Ten Commandments tablets from school buildings.

Deputies briefly took at least 30 protesters into custody, but later released them without filing charges.

They temporarily blocked a crane from taking the 800-pound granite tablets from three of the schools, but sheriff's deputies removed the protesters from school property.

All four tablets were removed by Monday evening.

Protesters, sheriff's deputies and school officials prayed together after the last monument was loaded on a truck and driven away.

"These people are religious people and don't want to cause me or anyone else trouble," Sheriff Kermit Howard said. "We're just here because there's a court order."

The school district is challenging a judge's ruling that the commandments violated the separation of church and state.

"We have to make the decision in America if there's going to be local control of what we're going to teach our children," said Dave Daubenmire, among those protesting at Peebles High. "Is it going to be the people here in the community, or some judge in a courtroom in Washington? The people of Adams County have spoken."

U.S. Magistrate Timothy Hogan ruled in Cincinnati last year that it is unconstitutional to display the Ten Commandments on public school grounds. He ordered them removed on Monday, after the school year was finished.

The American Civil Liberties Union sued in 1999 on behalf of a Peebles resident who objected to the display. The school district has appealed Hogan's ruling.