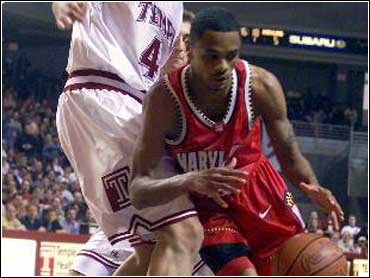 Temple got what it usually gets from its zone defenses. The Owls also got some impressive performances from a couple of players who have been struggling.

All that meant the 19th-ranked Owls beat No. 23 Maryland 73-65 Sunday in a February non-conference game played with the intensity of a March tournament matchup.

Lamont Barnes, who had scored in double figures only twice in the last nine games, had 23 points and Lynn Greer, who was 2-for-11 from the field in his last game and 0-for-5 in the first half of this one, scored all 14 of his points in the second half as the Owls (18-4) won their ninth straight game overall and 20th in a row at home.

The defense provided its usual numbers, holding Maryland to 38 percent shooting (24-for-63) while forcing 27 turnovers.

The Terrapins (17-7), who were coming off their upset win at No. 3 Duke, had no answer down the stretch as Temple started pulling away.

"It wasn't our defense that lost this game it was the way we executed our offense against the zone," Maryland coach Gary Williams said. "Twenty-seven turnovers, you don't have to look any farther."

Greer scored 10 straight points for Temple as it took the lead for good. His consecutive 3-pointers made it 53-49 with 7:23 left.

Consecutive jumpers by Mark Karcher, who finished with 18 points, gave the Owls a 59-54 lead with 4:33 left. Maryland got within 64-60 on a rebound basket by Terence Morris with 59 seconds left, but the Owls went 9-for-10 from the free throw line over the final 52 seconds.

"We got some good looks in the first half but maybe we wre rushing too much," Greer said. "In the second half we took our time a lot more. That was a good test for us. It's a big change from Atlantic 10 teams."

It was also quite a change for Maryland from what it is used to seeing in the Atlantic Coast Conference.

"We never see zones in the ACC and they play a good one," Williams said.

Morris finished with 17 points 11 over final six minutes and 12 rebounds for the Terrapins, who had won four straight games and six of seven. Juan Dixon had 21 points for Maryland, which finished with a 48-30 rebound advantage, while Lonny Baxter had 11.

The 27 turnovers were one off Maryland's season high.

"They played good defense but a lot of our turnovers were careless," Dixon said. "We played well in the first half and had a little run in the second half but they had the last run."

Pepe Sanchez had five points, 11 assists and a career-high nine steals for the Owls, who lead the nation in scoring defense at 53.9 points per game and are second in field goal percentage defense at 35.1.

Chaney has been hard on Barnes in recent weeks and didn't back down after the senior forward went 7-for-9 from the field and grabbed eight rebounds.

"He just showed up today. We gave the ball like we always do. He was the old Lamont today," Chaney said. "He's been wandering through the desert for the last three years."

Barnes has his own way of dealing with Chaney's style of criticism.

"Whenever I leave here and I'm in my dorm, I find myself thinking about the stuff he says to me," Barnes said. "It makes sense. He's taught me a lot. You can't just pinpoint one thing."

Chaney said that before the game the team found out that Steven Wesby, the older brother of freshman reserve Alex Wesby, had died Saturday night in nearby Bristol. Steven Wesby died of an "apparent drug overdose" at a party in a Bristol motel, Bucks County coroner Joseph Campbell said Sunday. Toxicology tests are scheduled.

"It was a tough situation for us," Chaney said. "Bill Cosby came in and sat the kid down and we said some prayers."

Cosby was the main speaker in a pregame ceremony that saw Temple's building renamed from the Apollo to the Peter J. Liacouras Center after the school's president who is retiring on June 30.