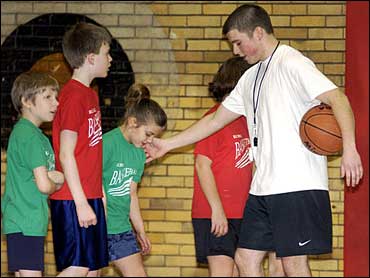 As the final buzzer sounds in the Northview Elementary gym, parents burst into applause and 20 children in red and blue T-shirts line up to shake hands.

Their cheeks are flushed, their hair damp with sweat, and most of them are grinning. But the scoreboard is blank.

"It doesn't bother me," says 9-year-old Chelsy Stout. "I just have fun playing."

In the Harrison County Parks and Recreation basketball league, standings for the under-13 teams are maintained only in the mind. Scores are kept by just a few parents, surreptitiously, on tiny notepads.

Like at least 2,300 communities nationwide, this north-central West Virginia county is taking a different approach to youth sports, toning down the competition to stress sportsmanship and equal playing time for every child, regardless of talent.

Over time, and with parental support, organizers say such changes could help keep children involved in athletics longer and reduce the violence that sometimes occurs at sporting events.

A 2001 survey conducted by Sports Illustrated for Kids found that 70 percent of children quit organized sports by age 13 because they are no longer having fun. Often, that's because coaches, referees and parents are too intense.

"When we first started not keeping score, we had hate letters coming in telling us we were un-American," says Harrison program director Mike Book. "One guy was so mad, he said, 'There are winners and losers in life, and the kids need to learn that.' But these are first-graders. They'll learn soon enough."

For millions of children, sports illustrate the value of teamwork, discipline and dedication. Sports keep them active in an era when many elementary schools are cutting physical education and the American Heart Association says 15 percent of 6- to 11-year-olds are overweight or obese.

"Competition can be a very healthy thing, but there's plenty of time throughout school sports to learn that," says volunteer basketball coach Steve Richardson. "When winning becomes most important - above all else, above having fun, above friendships - they won't want to come back."

Kourtney Reynolds, 8, of Shinnston, played two eight-minute quarters with Richardson's courtside encouragement. She didn't score, but she had fun. And she knew - at least unofficially -- who won that Saturday in March.

Blaine Reynolds put his daughter in the league last year so she could learn the basics. This year, he let her choose between Book's program, where she could build her self-confidence, and a more competitive league, where she would be cut if she didn't play well.

"They say it's not competitive," Reynolds says, "but they're trying to win. A lot of times, she'll tell me the score."

Little League Baseball, perhaps the most competitive of all youth sports, isn't philosophically opposed to the idea of less intense competition for its younger participants, says Lance Van Auken, a spokesman for the organization in Williamsport, Pa.

"The idea certainly is something each community should decide for itself," he says. But of the 7,400 leagues worldwide, only about five have asked for permission to drop scoring in the minor division.

"Part of the reason for that is people expect, in a traditional sense, if you're going to play a baseball game, there's going to be a winner and a loser," he says. "For decades, no one had any problem with that."

What's changed, he says, is the nation's growing focus on adult misbehavior at children's games.

"We don't think competition itself is unhealthy," Van Auken says. "It's how the parents deal with it. The kids deal with it just fine."

Fred Engh, president and founder of the Florida-based National Alliance for Youth Sports, says most of the nation's 2.5 million volunteer coaches and youth recreation administrators are well-meaning but poorly trained.

His organization has created a campaign to help them with positive coaching techniques. In about 600 communities, it also requires parents to attend a class in sportsmanlike behavior and healthy competition, teaching them such things as how to keep their cool in the heat of the game.

"Winning at all costs is probably the ugliest thing we can teach children, yet we have many, many people - parents and coaches - who do that today," Engh says.

One sports psychologist found that 84 percent of 8- to 10-year-olds surveyed would rather play for a losing team than sit on the bench of a winning team.

"Parents and coaches impose their values on children," Engh says. "We're the ones who create the standings and scoreboards. Do you really think kids would have world championships?"

Van Auken says that's why Little League requires coaches to let every child play every game and why scores aren't kept in the tee-ball league for 5- and 6-year-olds. By age 8, though, he says children are ready for both instruction and the experience of losing.

"We see no ill effects from having a Little League World Series," he says.

A game may end with children in tears. "But we also see that 15 minutes after the game, the kid that struck out and lost the game is upstairs playing ping-pong in our rec room with the kid from Japan who struck him out and won the game."