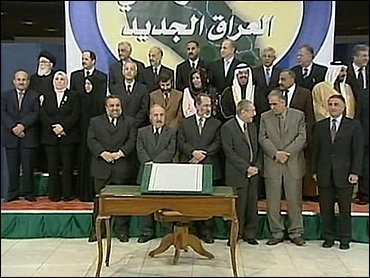 
"This is a major achievement for Iraq, for the region and for the world, and we should be very proud of the part we played in this." Those optimistic words came from Secretary of State Colin Powell earlier this week as all 25 members of Iraq's Governing Council – appointed by the U.S. point man in Iraq, Ambassador Jerry Bremer – signed the new administrative law in Baghdad.

Appearing before a Congressional committee, Powell called the signing event "historic" – and who could argue with that. The law, which is to be followed by a permanent constitution, provides for democracy, a bill of rights, an independent judiciary, civilian control over the military and rights for women, among its many provisions. As for the key concern in Washington that there may be a delay in turning sovereignty over to the Iraqis by June 30, Powell assured Congress that the transfer date is still on track.

Powell also took part in another ceremony this week in Washington, promoting a $10 million Bush administration plan called the Iraqi Women's Democracy Initiative, along with the U.S.-Iraq Women's Network. These programs are designed to provide training in leadership skills and organizing political activities, conduct workshops in such areas as constitutional law, independent media, human rights and non-governmental organizations. Prominent American and Iraqi business leaders and non-governmental representatives will also be brought together for discussions aimed at improving and empowering the lives of Iraqi women.

After listening to one of Iraq's female government ministers speak in the State Department's Treaty Room, Powell combined his optimism with a dose of reality. "As the minister just said, the road ahead may be difficult, it may be long, but it won't be as difficult or as long as the road that was behind."

Yes, senior Bush administration officials, as well as many others, are proud of getting rid of Saddam Hussein and getting Iraq started on the uncharted road to Baghdad-style democracy.

There is considerable progress to note and much planning underway to staff an American embassy in Baghdad by the end of June when sovereignty will be restored to a transitional Iraqi government. Senior administration officials speak of having 700 to 1,000 Americans working at the new embassy, backed up by an even larger force of locally hired Iraqis.

As all this goes on, and as more and more schools and hospitals are rebuilt, more oil production brought on line and more electricity brought to the Iraqi people, there is another side of the coin to the war to oust Saddam's regime.

Acting as a drag on all this progress and optimism is the simple fact that Americans continue to die in Iraq. Yes, deaths are down and we speak of the numbers now weekly rather than daily, but that kind of progress is not much consolation to the families left behind back home. New military units are being rotated into Iraq as people who have served there for the past year or more pack up and leave.

We are also acting as midwife as Iraq bears the brunt of democracy's birth pains. When the Shi'a cleric, Ali al-Sistani had last-minute objections to the administrative law, its signing was held up until a compromise could be found. Not a big problem as it turned out and one Powell referred to as a "small bump in the road." True enough this time but almost certainly a timely indication of things to come.

As the days tick off until the end of June, there will be many more "bumps in the road," some large, others small. Each is going to require some sort of compromise to solve, political, economic or military. Shi'as, Sunnis and Kurds all will attempt to exercise power in any way they can even as the U.S. power-broker in charge, Ambassador Bremer, will see his clout lessen as June nears. All the while, American soldiers will continue to be on the receiving end of improvised explosive devices and ambush-style attacks by diehard elements of Saddam's regime.

We'll know whether Secretary Powell's current optimism is justified only if the problems in Iraq's budding democracy are solved as easily in late June as they were in early March. A gambling man would want to cover his bets on that.