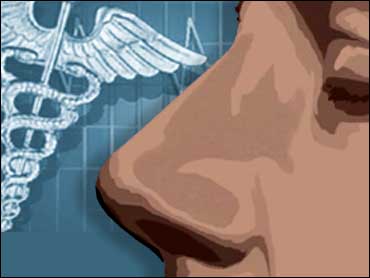 Sinusitis, which is an inflammation of the sinuses, is one the most frequently diagnosed conditions in this country.

Eye, ear, nose and throat specialist Dr. Lanny Close from Columbia University Medical Center East stopped by The Early Show to explain how one gets sinusitis, and more importantly, how to get rid of it.

Dr. Close says sinuses are mucus-secreting glands that partially serve to humidify, filter and warm the air one breathes. "They have an important function in terms of respiratory health," he says.

What happens when you get sinusitis?

"There's an inflammation of the mucosa that lines the sinus. The openings are called apertures and they're quite small to begin with but the swelling of the mucosa blocks them," Close explains. "The mucus that stays in the sinus is rich in carbohydrates and proteins, so it forms a perfect culture medium for infection and that's how the infection occurs."

Symptoms include a stuffy nose, postnasal drip, headaches, a dazed feeling, fever, discolored nasal discharge, pain, aching in the teeth below the sinus.

Many of the symptoms sound like a cold and Close says that, in fact, most sinus infections follow a cold. How can one tell the difference between an infection and a cold?

If you see those symptoms, there are several ways to treat sinusitis. Treatment options include drinking lots of fluids, having a bowl of hot soup, inhaling steam and nasal steroid sprays. If you have sinusitis, doctors recommend not flying or scuba diving. Surgery to enlarge the sinus openings is also an option.

There are also over-the-counter drugs. Are they effective?

"Again, if you just have a cold and you don't have some of these attendant symptoms that would suggest you have an outright infection then, yeah, there's a lot of over the counter medications that can help," says Close. "Let's go back to the easy ones that aren't over the counter. Steam. You can get that. All you have to do is boil a pot of water in your kitchen and throw a towel over your head or take a hot steamy shower."

If you have sinusitis, Close says some of the over the counter products may be helpful in certain ways, but " if you have an actual bacterial infection, you really need to be on an antibiotic and you can't get that without a prescription."