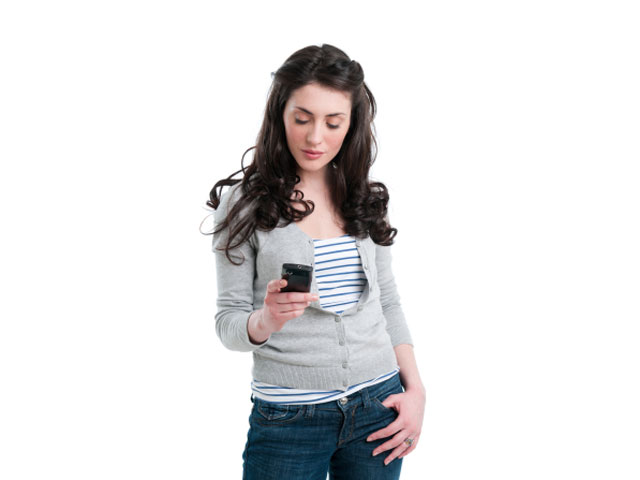 Rather than serving as a substitute for risky behaviors, the study of nearly 2,000 teens found kids who sent such messages were more likely to engage in risky behaviors, such as being sexually active and having unprotected sex, raising their risk for sexually transmitted diseases.

One in four teens admit to sexting, study finds
Watch: "Sexting" not as common as some feared: Study

"No one's actually going to get a sexually transmitted disease because they're sexting," Dr. Eric Rice, a researcher from the School of Social Network at the University of Southern California in Los Angeles, told Reuters. "What we really wanted to know is, is there a link between sexting and taking risks with your body? And the answer is a pretty resounding 'yes.'"

For Rice's study, published online in the Sept. 17 issue of Pediatrics, he and his team looked at survey data from more than 1,800 Los Angeles-area teens between grades nine and 12, who were part of a nationally representative Centers for Disease Control and Prevention study of youth-risk behaviors. They determined 15 percent of the adolescents who had a cell phone said they sexted, with more than 50 percent of the responders saying they knew someone who had sent a sext. The majority of students with a cell phone who were surveyed did not engage in sending such messages.

Not surprisingly, teens whose peers sexted were more likely to sext themselves - about 17 times more likely than their counterparts who didn't send the messages.

The researchers called the latter finding "particularly alarming," since unprotected sex raises risk for transmission of HIV and of other sexually transmitted diseases.

Though the researchers found only a minority of surveyed teens overall said they sent sext messages, they believe this behavior could serve as a place for parents, doctors and educators to intervene and head off risky behaviors.

"We recommend that clinicians discuss sexting as an adolescent-friendly way of engaging patients in conversations about sexual activity, prevention of sexually transmitted infections and unwanted pregnancy," the authors wrote, adding such discussions should also be built into the health curriculum at school.

A link between teens who sext and teens who have sex was also confirmed by a July study in Archives of Pediatric & Adolescent Medicine. That study of teens at Texas public schools also found that teens who were merely propositioned to send a naked picture were also more likely to have sex. More than seventy-five percent of teens in that study who were asked to send a sext, even if they didn't agree to do it, admitted to having had sexual intercourse, compared to fewer than 40 percent of teens who had not been propositioned.

"While some have suggested that sexting may be a safe alternative to sexual behavior, it is not surprising that these online behaviors are entangled in teens' face-to-face interactions," Shari Kessel Schneider, a senior research associate at the Education Development Center in Newton, Mass., who was not involved in the new research, commented to HealthDay. "If a parent finds out their child is sexting, it's an important opportunity to engage their son or daughter in a discussion of what constitutes a healthy relationship and how youth can stay safe both emotionally and physically."

The American Academy of Pediatrics (AAP) recommends parents speak to their kids about sexting, even if the issue hasn't directly impacted their community, to gauge their child's understanding of the issue. For younger kids with cell phones who don't yet know about sex, it is important to use an age-appropriate example, such as by saying texts should never contain pictures of people without their clothes on. For teens, the academy recommends being very specific, telling them "sexting" often involves pictures of a sexual nature and is considered pornography.

The AAP has more tips for parents talking to their children about social media and sexting.