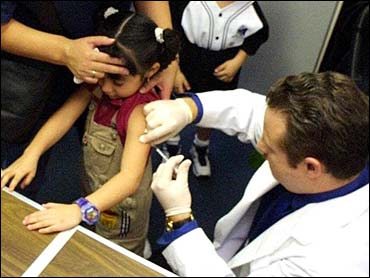 Meningitis can strike out of the blue and kill within hours. Leslie Meigs knows because she almost died of it six years ago, when she 8.

That's why she wants kids to get the new shot. Federal officials and doctors agree wholeheartedly.

The Centers for Disease Control and Prevention and the American Academy of Pediatrics on Thursday recommended that more than 8 million U.S. children — 11- to 12-year-olds, students entering high school and college freshmen headed for dorm life — get the vaccination.

Although meningococcal meningitis affects only about 3,000 people nationwide each year, it kills a fifth of adolescents who get it.

"This is a very bad disease," said the academy's Dr. Carol J. Baker, an infectious disease specialist at Baylor College of Medicine in Texas. "It's very rapidly progressive in adolescence. You can have an adolescent in a shopping mall at 2 in the afternoon, in the emergency room at 6 in the evening, and death by midnight."

For Meigs, who lives in Houston, it happened when she woke up with a slight fever and later started vomiting.

By nighttime Meigs was hospitalized with a purplish rash caused by tissue damage from the bacteria infiltrating her bloodstream. She became comatose, had kidney failure, and her parents were told she would probably die.

Meningococcal meningitis doesn't always include classic meningitis symptoms — headache and stiff neck. It can start like the flu and progress to organ failure and tissue damage requiring amputation.

The vaccine was approved in January, and in February a government advisory panel urged federal health officials to recommend the shot be given to people in certain age groups — primarily those at highest risk

The meningitis vaccine recommendations are designated for 11- to 12-year-olds at routine doctor checkups; 15-year-olds or those entering high school, because they're becoming more socially active and exposed to more germs; and college dorm-dwellers, because close quarters spread disease easily.

Only a single shot is necessary — youngsters who are vaccinated at any of those ages don't need a second one — and it is expected to protect against the disease for up to 10 years. Health officials aren't recommending the shot for all teens because of limited vaccine supplies.

An older shot, effective for a shorter time, has been given in the past to at-risk children with chronic diseases or who are traveling to outbreak areas.

Already widely available, the new shot costs patients about $100 but is likely to be covered by many health insurance plans. The academy hopes that within three years all U.S. adolescents will receive routine meningitis shots at age 11.

Meigs, now a freshman in high school, says those at risk should get the shot.

After experimental drug treatment and two months in the hospital, she survived. Now a healthy cheerleader, the twisted burn-like scars from tissue damage on her shoulder, ankles and knees are stark reminders of her ordeal.

"I don't think anyone needs to go through what I went through," she said.