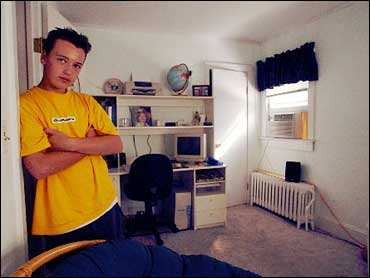 They watch movies, pig out on pizza, then crash on the floor or on couches and beds in various rooms in the house. It's the typical teen sleepover - with one notable change: These days, the participants are increasingly likely to be boys and girls together in one big, coed event.

Mixed-gender sleepovers are gaining popularity, not to mention buzz on teen Web sites. Teens say they're just another way to hang out - a result of mixed groups of friends who want to spend even more time together. Some parents go along with that, though teen health experts warn that coed sleepovers make sexual exploration too tempting.

Samantha Gioia has been invited to three in her hometown of Greensboro, N.C. Her hesitant parents have let her go because of what she calls a "trust and faith in each other that, from my view, is rare."

David Harrington, who's from Kingston, N.Y., is having less luck persuading his parents. He's been invited to two coed sleepovers, but has been required to come home by midnight each time.

"I'm friends with both boys and girls," says David, who like Samantha is about to turn 16, "So what's the big deal?"

His dad, Gerry, has a candid answer: "Truth be told, I'm largely using my own sexual barometer - my own 'teen libido memory' - in making this decision."

He's not the only parent who feels that way.

Carly Donovan says her mom "flipped" when she found out that boys were included at a recent sleepover at a friend's house in Scituate, Mass.

Carly, who's 15, says she was "totally comfortable" sleeping in the same room with the boys, who are friends.

"The only thing was waking up in the morning and not looking your best. But I was just like, 'Whatever,"' she says. "They don't care, so I was fine with it."

Her mom was not fine.

"Kids that age are experiencing raging hormones," Cinda Donovan says. "Are we supposed to trust them?"

Kushner says she's run across only a few coed sleepovers in her practice. But she has had young patients show up in her office the night after the prom, asking for tests for pregnancy and sexually transmitted diseases.

"There are so many factors involved, such as peer pressure," Kushner says.

Gilda Carle, a psychotherapist and author, agrees that the sleepovers set up situations where teens may feel pressured to have sex, especially if alcohol and drugs are present.

"Kids are so burdened with all kinds of stressors in their lives today - why add another stressor?" asks Carle, who addresses coed sleepovers in one of her books for teens and parents. "I think this is a very unfair position for parents to put their teenagers in."

Even some teens concede that there is reason to worry.

Of 879 young people recently polled by Teen People, for example, 83 percent said they'd seen or heard of their peers "fooling around" while at such an event. (Just over half said they'd been to a coed sleepover.)

Still, some young people say parents should base their decision on the circumstances. That includes Anne Hunnell, an 18-year-old who's just started her freshman year at the University of North Carolina-Chapel Hill.

She says her parents allowed her, grudgingly at first, to stay over with supervised coed groups when she was in high school - especially if it meant they didn't have to drive home from a party or concert late at night.

She says two of her friends who attended ended up dating later, but that there was nothing but friendship at the time.

"It seemed like we all respected each other," says Hunnell, who now lives in a coed dorm.

Nicole Quigley, who's 25 and living in Washington, D.C., says there was another reason her parents - perhaps ahead of their time - let her have coed sleepovers when she was younger.

"If we weren't allowed to have stay-overs, we probably would have been using our bedroom windows as backdoors and hanging out with boys anyway," says Quigley, who grew up in Florida.

She says she behaved at the sleepovers because "I saw them as a privilege I didn't want to lose."

David Harrington hasn't given up on the idea of attending a coed sleepover. But he chuckles at the thought of throwing his own - an idea he's already posed to his parents.

"As you can imagine," he says, "I was quickly vetoed."
By Martha Irvine