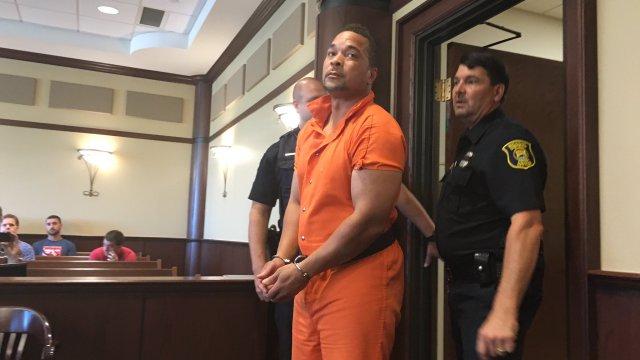 DEARBORN HEIGHTS, Mich. -- A Detroit-area man who served 16 years in prison for killing his first wife was charged Thursday with killing his two children and two stepchildren, and torturing his wife.

Prosecutors allege that Gregory V. Green bound his wife, cut her face with a box cutter and shot her in the foot before fatally shooting her teenage children in front of her Wednesday at the family’s home in Dearborn Heights.

Green, 49, also is accused of killing the couple’s two young daughters by carbon monoxide poisoning. CBS Detroit reports he is believed to have killed the two youngest children with exhaust fumes in a car before moving them inside and placing their bodies in their beds.

Both teens were shot multiple times, execution-style, the station reports. Police found their mother injured and bound with duct tape and zip-ties.

Green is charged with first-degree murder, assault, torture and other crimes. Green heard the charges during a brief court hearing Thursday and was returned to jail without bond. He wasn’t accompanied by a lawyer.

Police said Green called 911 early Wednesday and confessed to the killings. He then waited on the porch for police to arrive, the station reports. His wife, Faith Green, had recently filed for divorce. She survived her injuries.

Dearborn Heights Police Capt. Michael Petri said the bloodshed “seems to have stemmed from a domestic violence related incident,” adding that police have never been called to the home in the past.

In her divorce filing, Faith Green cited a “breakdown in the marriage relationship.” She also filed for divorce in 2013, but the case was dismissed for lack of action. A judge rejected a personal protection order that same year.

The Greens married in 2010, two years after Gregory Green left prison on his fifth request for parole. He pleaded no contest to killing his first wife, who was pregnant, in 1991.

Kara was a senior, cheerleader and member of the National Honor Society at Southfield High School for the Arts and Technology. Her brother graduated from high school in 2015.

“The thought that you could do something to your own children has no correlation to any reason in my mind,” he said.

A probable cause hearing was set for October 5.