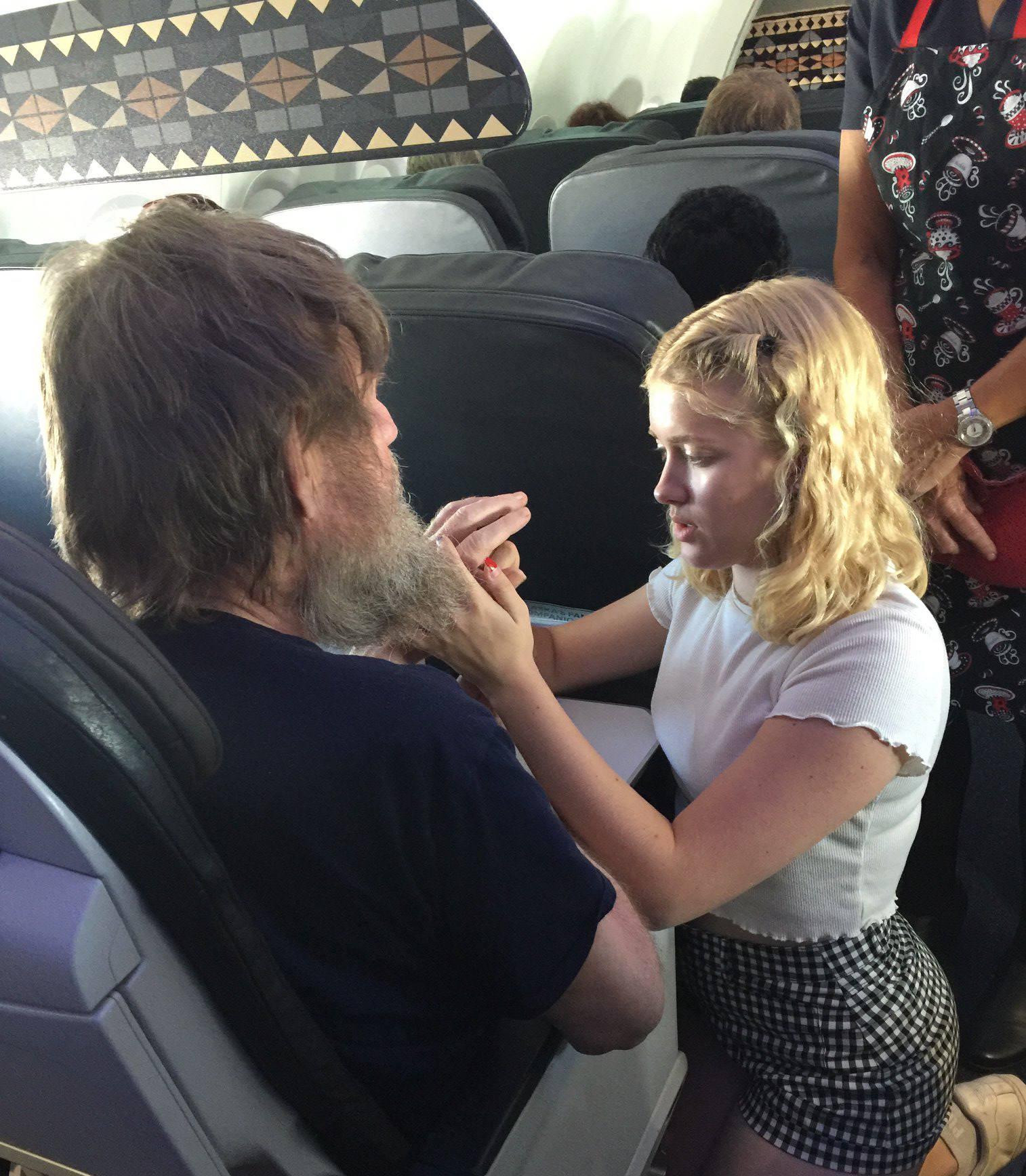 A California teen stepped up to help a blind and deaf man who was alone on a flight and needed help communicating. Her random act of kindness has touched thousands of people who have seen her story shared by her mom on Facebook.

Clara Daly was on an Alaska Airlines flight with her mom Jane last week, but it wasn't the plane they were supposed to be on. Their original flight home from Boston was canceled, and they had to race to make an earlier flight. Jane writes that they made a mad dash to the airport and just made it. Clara now believes the flight change was supposed to happen for a profound reason.

Shortly after takeoff, a flight attendant made an announcement, Jane says. She asked if anyone on the plane knew sign language. "Clara has been studying American Sign Language so she rang the flight attendant button," Jane writes on Facebook. "They explained that the passenger was not only deaf, but also blind. The only way you can communicate with him was by signing into his hand."

"They thought that he might need something and they weren't sure how to communicate," Clara told CBS Los Angeles. So, she walked over to the man's seat to see if she could help. She signed into the palm of his hand, and helped him communicate with the flight attendants. "Several times he requested her assistance throughout the flight," Jane writes.

She helped him ask for water, and how much time was left for the flight. Clara was happy to get up and help him whenever he needed, then "toward the end of the flight, he asked for her again, and this time he just wanted to talk. She spent the remainder of the flight until landing with him," Jane writes.

"He didn't need anything. He was just like lonely and wanted to talk," Clara told CBS Los Angeles. The teen from Calabasas was happy to do so. Her only worry was that she might spell something wrong when signing into his hand. Clara is dyslexic and says English is already hard for her. But she overcame multiple barriers and helped the stranger communicate -- something he probably couldn't have done without her there.

Clara says since she is dyslexic, she started learning sign language about a year ago because she "saw sign language as a way to communicate without having to read and write." Her parents, Jane and Bill, told CBS Los Angeles they could not be prouder of their daughter.

Jane took photos of Clara's good deed and shared them on Facebook after they landed back home in California. She says their original flight was direct to Los Angeles, but the new flight they were put on had a layover in Portland. Timothy, the man Clara helped, was flying to Portland. If it weren't for the flight change, they would've never met him.

Jane shared photos of her daughter's good deed when they finally arrived back home in Los Angeles. "She'll probably kill me for posting this, but - Proud of my girl," the happy mom wrote. The photos of Clara helping Timothy went viral, but Clara says "Doing something like that is just like what anyone would have done."