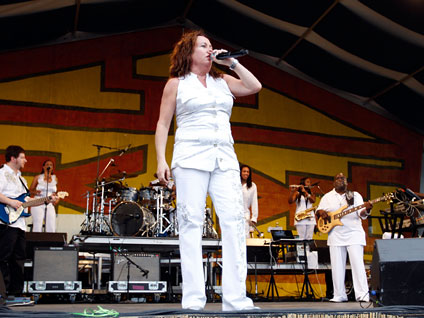 NEW YORK (CBS) R&B singer Teena Marie, who died unexpectedly at her Los Angeles home Sunday, is being remembered as an influential artist and mentor to many musicians.

Marie, known as the "Ivory Queen of Soul," is famous for such hits as "Lovergirl," "Square Biz" and "Fire and Sesire" with mentor Rick James. She was 54.

Grammy winner Mary J. Blige was another musician who paid her respects via Twitter. She wrote, "Rest in peace Teena Marie. My Love for u is forever."

Singer Sheila E tweeted that she "will miss my girl Teena Marie."

"Real music by real people," she wrote. "God bless my sistah and her family. U will be missed."

Common, who was born under the same sign - Pisces - as Teena Marie, said the two shared a belief in reincarnation. "That's why 'De Ja Vu' is my favorite song," he tweeted.

Even O'Jays founder Eddie Levert weighed in with a statement to CNN. "There are a lot of black people who swore by her and believed in her, as far as her music was concerned," he said.