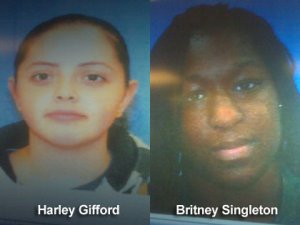 (CBS/KYW) UPPER DARBY, Pa. - TwoPhiladelphia teenagers are being charged in connection to over a dozen burglaries across the city's suburbs during the last few months, police say.

Police superintendent Michael Chitwood says Harley Gifford and Britney Singleton, both nineteen, broke into homes in Upper Darby, bordering West Philadelphia, and nearby Prospect Park for the thrill of it, according to CBS station KWY. The duo reportedly took everything from toilet paper to religious statuary, including a flat-screen TV and about $21,000 in cash.

"This was their shopping spree," Police Capt. George Rhoades said, according to Fox News. "They didn't buy lotion or nail polish, because they stole it. They took whatever they could get their hands on."

Chitwood, who jokingly refers to the duo as "Thelma and Louise," told reporters, "They said they've stolen so much stuff that they can't get rid of it quick enough, and we got four or five places that they've gotten rid of some of the merchandise that they stole."

According to Fox News, the pair said they failed to rob one house because it was guarded by a lion.

"It's kinda funny. They said they shut the door and got out," Chitwood said. "We asked, 'Are you sure it wasn't a big dog?' And they said separately that it was a lion."

The two women made off with all of the loot without the aid of a car, reports KWY.

Victims are reportedly being contacted in hopes of reuniting them with some of their stuff, although not all of the stolen property has been recovered.