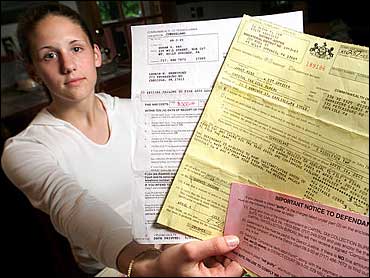 When 17-year-old Laurie Hanniford worked as a part-time swim instructor three years ago, she made $316 and paid $3.16 in local taxes. Last month, she was fined $352 for not filing a local tax return.

Hanniford, a high school junior, pleaded no contest and got the fine reduced to $77. But the ensuing outrage from her parents and the parents of about two dozen teens who received the same treatment has prompted officials to consider softening the ordinance.

"It's the stupidest thing I've ever heard of to fine her — she was 14 at the time — for taxes that have already been paid," said the teenager's mother, Sarah Hanniford.

When Laurie read the certified letter containing the words "failure to comply will result in your arrest," she called home from the post office.

"She couldn't drive, she was crying so hard," her mother said.

When the bureau didn't receive a response, it had a district justice issue a criminal complaint. The Hannifords said they received no notices. Harbeson said many people think the letters are junk mail.

Complaints over the pursuit of delinquent returns are nothing new, Harbeson said.

"You think people want to pay taxes?" he asked.

He said the bureau, which collects taxes from 75 area municipalities and school districts, pursued 7,024 such complaints last year, including a small number of minors.

Township Council Chairman Tom Faley said he would try to persuade lawmakers to exempt those who make less than $2,000 from taxes. State law already allows tax exemptions for those earning less than $10,000.

In the meantime, Faley says he worries about more teens getting black marks on their criminal records.

"I don't know where this is going to stop," he said.