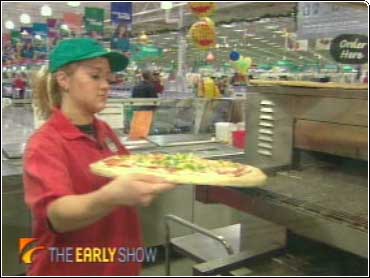 The Early Show's Contributor Tracy Smith is a Correspondent for the Channel One Network, seen in high schools across the nation. And she will be reporting every other Thursday on issues that affect teen-agers. This week she tackles how teens balance school and work.

With a booming economy and plenty of jobs to go around, experts say high school students are working more hours than ever, especially during this holiday season.

That means they're studying less and sleeping less. But the teens I talked to say they can handle it most of the time.

"In the last 10 years, we've seen 100 percent increase in the number of teens working," said Pete Rimsans from the Indiana Department of Labor.

And they are going at it with a vengeance. "They are eager to please. They are going to work long hours," he said.

"People say this generation is a bunch of slackers; I would disagree with that. They are stepping up and filling in the gap that adults were filling in 10 to 15 years ago," Rimsans added.

Some teens work to help support their parents; some work for their future, but most of them work for what they want right now.

Working teen Darrenda Carlisle explained: "Your parents aren't going to give you money every time you turn around, so you need to make your own."

And when asked, teens say they spend their money on car, insurance, CDs, clothes whatever they see.

"I need all the money I can get," noted one teen, and that means lots of hours.

The average student spends 20 hours at work. Add that to school, sports practice and study time, and you will find that some teens work more than their parents.

And though they say sometimes that freaks them out, it scares their teachers, too. For the hardest working teens, sleep is sometimes a low priority. But they have got to sleep sometime.

One teen says she is going to bed at 2 or 3 in the morning and getting up at 6 a.m. So when does she sleep? "In my classes," she said.

And report cards show grades are going down.

"Let's just say my grades weren't that good this time. But I had some good paychecks there for a while," said another teen.

Jonathon Jadvani has a reason to be tired. After a full day in class, there's band practice, and then, at least 30 hours a week at the local pizza place. But so far, he's holding it all together.

"For some, it may be too much. But if you're an organized person, you can handle it. It also builds character. You're going to be working the rest of your life," he said.

So how much work is too much? Well, most experts agree that 20 hours is the most teens can handle without any problems.