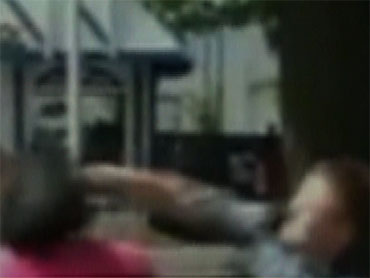 A Seattle teen seen on cell phone video shoving a police officer who then punched her in the face has apologized to him, and he accepted the apology, authorities say.

Separately, the King County prosecutor charged the 17-year-old as a juvenile, with third-degree assault. That's punishable by a maximum 30 days in detention.

The incident happened Monday as the teen was intervening in a friend's jaywalking arrest by Police Officer Ian Walsh, 39.

The video shows Walsh trying to arrest 19-year old Marilyn Levias. The two were already struggling when Levias' friend, the 17-year-old, pushed the officer, and he responded by punching the friend in the face.

James Kelly, president and CEO of the Urban League of Seattle, told KOMO-TV he had requested the meeting between the teen and Walsh to help calm the situation.

Earlier, Kelly had said, "The use of violence in the form of a full-blown fist to the face was wrong," and leaders of several community groups, while not excusing the suspects, said Walsh clearly overreacted.

Levias was arrested on charges of obstructing a police officer.

CBS affiliate KIRO-TV found court records showing Levias has been arrested for assaulting a police officer before. According to the documents, Levias kicked a King County Sheriff's deputy in the stomach while she resisted arrest at the Ruth Dykeman Center in Burien, Wash.

Walsh has been temporarily re-assigned.

To see the incident, click on the video below of a report by Tarar Mergener, introduced Chris Wragge, who was "The Early Show" 's newsreader the day this report aired: