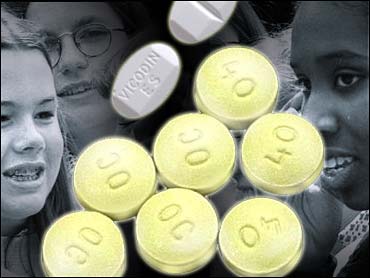 Cigarette smoking is at its lowest level in a survey of teenagers and use of illicit drugs has been declining, but continuing high rates of abuse for prescription painkillers remain a worry, the government reported Monday.

"Prescription drugs are very powerful medicines that are effective when used properly and with a doctor's supervision," Dr. Nora D. Volkow, director of the National Institute on Drug Abuse, said in issuing the agency's annual survey of drug use by children in grades eight, 10 and 12.

"Using these drugs without a prescription is dangerous. It's imperative that teens get this message," she said.

"I'm pleased to see the decreased drug use noted in this survey; however, the upward trend in prescription drug abuse is disturbing," said Dr. Elias Zerhouni, director of the National Institutes of Health. "We need to ensure that young people understand the very real risks of abusing any drug."

Also of concern is the significant increase in the use of sedatives and barbiturates among 12th-graders since 2001.

Overall, however, the report had good news, particularly about cigarette smoking.

It cited a 19 percent decline over the past four years in the use of any illegal drug in the month before the survey was done.

"Teens are getting the message. Drugs are harmful and will not only hurt their brains and bodies, but also damage their futures," said John P. Walters, director of the White House's Office of National Drug Control Policy.

Smoking is a concern because cigarette use is often seen prior to use of other drugs.