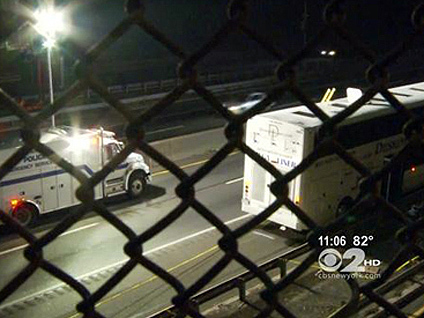 FORT LEE, N.J. - A teenager headed to a Sweet 16 party was killed after he stuck his head out of the emergency hatch of a double-decker bus and hit the underside of a highway overpass, police said.

Daniel Fernandez, of Sayreville, N.J., was among 65 teens aboard the bus Friday night as it crossed the George Washington Bridge from New York City, said Port Authority of New York and New Jersey police.

The 16-year-old was pronounced dead at a hospital.

The accident occurred at the Fletcher Avenue overpass of Interstate 95 at about 6:30 p.m.

Alex Franco, a security guard on the bus, told the Daily News that he had warned the teens to leave the hatch alone.

"I told them not to open the hatch, like three or four times, but kids, they don't understand," he said.

Franco said he went downstairs to tell the driver that it was getting too hot.

"It was very hot. Everybody was dancing. Two, five minutes I was downstairs," he said. "Then I heard two guys screaming, `Oh, my God, oh, my God."'

Designer Transportation, which operates the bus, expressed its "deepest heartfelt sympathy" for the boy's family. It says it plans to conduct an internal investigation.