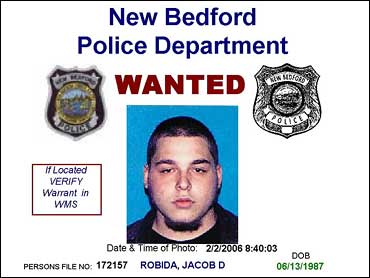 A teenager armed with a hatchet and handgun opened fire inside a gay bar early Thursday, wounding at least three people in what police are investigating as a hate crime.

A bartender at Puzzles Lounge told The Associated Press that the young man, dressed all in black, ordered a drink and asked if Puzzles was a gay bar. He finished his drink shortly after midnight, ordered another, then started attacking people, the bartender said. Three were hospitalized Thursday.

According to a court filing attached to the warrant, his mother told police he came home around 1 a.m., bleeding from the head, then left again. Officers who searched his bedroom found what they described as "Nazi regalia" and anti-Semitic writings on the wall, the police affidavit said.

It said Robida was recognized by a woman in the bar.

"Obviously we have a man who's dangerous, who's not rational, and he has weapons," Bristol prosecutor Paul Walsh Jr. said.

Spirlet said the teenager was armed with a handgun and "some sort of cutting instrument" when he walked into Puzzles Lounge.

The bartender said the man finished his drink and walked to the back of the bar where two men were playing pool, shoved one to the ground, then pulled a hatchet from his sweat shirt and began swinging at the man's head, cutting him. Spirlet said the attack came without provocation.

According to the New Bedford Standard-Times, the police report said, "A struggle ensued in which he struck a second patron. During the struggle, the suspect fell, at which time a handgun fell out of his jacket to the floor. The patron picked up the handgun and started firing."

The silver hatchet with a black handle was recovered from the floor of the bar and a knife still in its sheaf was found outside, the report said.

Other patrons tackled the man, sending the hatchet sliding across the floor, the bartender said. That's when the man pulled out a handgun, he said. The gunman shot both pool players and fired at a patron who was leaving the bathroom, hitting him in the chest.

"He was shooting at everyone," said the bartender, who asked to be identified only by his first name, Phillip, because he was concerned about his safety.

Police found the hatchet and a machete in the bar, he said.

A family friend who answered at his home Thursday said his mother, Stephanie Oliver, had no comment.

Puzzles is popular with the local gay community and is listed on Web sites offering resources to gays and lesbians. Police said they rarely respond to reports of trouble there.

"If all the bars in the city were that quiet, we'd be great," Spirlet said.