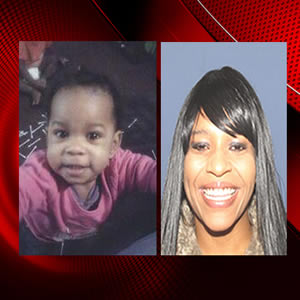 (CBS/AP) CLEVELAND - Cleveland police say a wanted man kidnapped his estranged girlfriend and her 1-year-old at gunpoint, and all three were found shot to death hours later.

Police said the couple had dated for about two months and that the woman, Latasha Jackson, 19, was trying to end the relationship.

Jackson and her young daughter Chaniya Wynn were walking with Jackson's 14-year-old brother around noon Saturday when they encountered the man, Thomas Lorde. Jackson's brother said Lorde pulled out a gun and ordered him to walk away, according to police. The girl's father told police Lorde said he was going to kill Jackson and take the child.

Jackson, the baby and Lorde's bodies were found early Sunday in the closed garage of an unoccupied building, said police Sgt. Sammy Morris. It appeared that Lorde shot himself in the head, but the county coroner had not yet determined the causes of death.

Lorde was described as a violent sexual predator with outstanding felony warrants in New York.