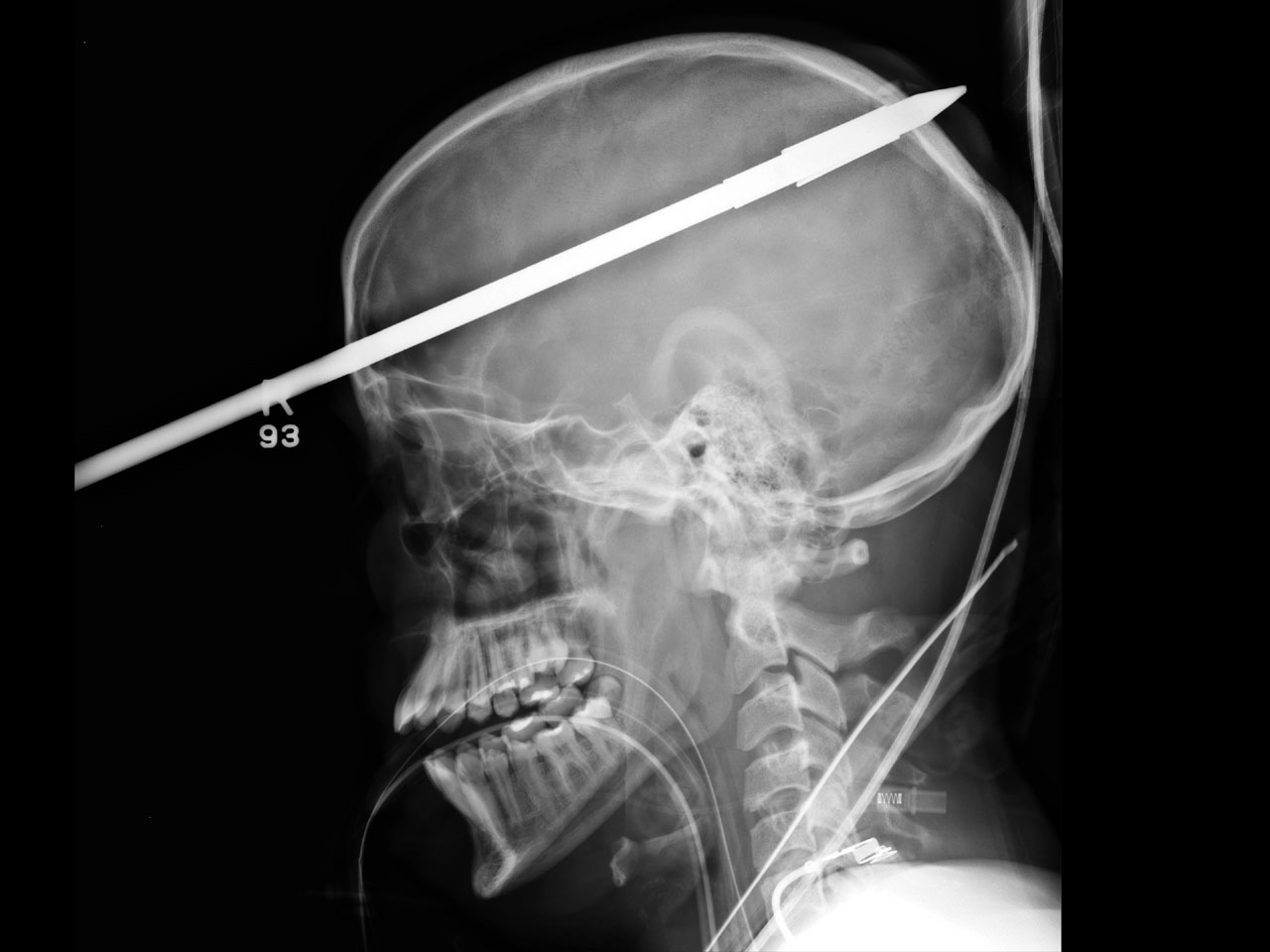 (CBS News) Sixteen-year-old Yasser Lopez is currently recovering from a freak accident in which a spear longer than 3 feet discharged through his head. Amazingly the teen survived, and his doctors explained the unusual case to media at a press conference in Miami on Monday.

CBS Miami reports that Yasser's survival may be a result of the spear miraculously missing the major blood vessels in the teen's brain.

The episode unfolded when Yasser and a 15-year-old friend were hanging out June 7th, when the friend loaded a spear gun that accidentally deployed, according to a statement from Jackson Memorial Hospital in Miami. The spear struck Yasser about one inch above his eye, his doctors said, with three feet protruding from his forehead and the other end penetrating the back of his head.

"You could feel the skin and the spear penetrated through the back of his skull," Dr. George Garcia, an assistant professor of surgery at the Army Trauma Training Center and one of the boy's doctors, told CBS Miami.

Incredibly, Yasser was awake during the incident and could communicate with doctors.

"It's not every day that someone is brought in and speaking with three feet of a spear protruding," Garcia said, adding the first treatment obstacle for doctors was to not become distracted by the sight.

What was also essential in Yasser's care was preventing the spear - and the teen - from moving to avoid more brain damage. Doctors used a rebarb cutter and vise grips to steadily cut off a large 18-inch portion of the protruding spear, and credited paramedics for keeping the teen's head still while he was transported to Jackson Memorial Hospital.

"In his case what we needed to do is make sure none of the blood vessels had been injured," Dr. Ross Bullock, a neurosurgeon and professor of neurological surgery and clinical director of the neurotrauma program at University of Miami/Jackson Memorial Hospital, told CBS Miami. An angiogram test confirmed the blood vessels were spared. The spear was successfully removed in the operating room over a three-hour surgery.

Dr. Anders Cohen, chief of neurosurgery and spine surgery at The Brooklyn Hospital Center in N.Y., told HealthPop that the spear's missing of major blood vessels was one of three factors that worked in the boy's favor. Cohen was not involved with the boys care.

Another factor, he said, was the spear penetrated the right side of the boy's brain, which is considered a non-dominant hemisphere with fewer major blood vessels, that is not as crucial for certain brain functions. Cohen said if the spear had been shot entirely through the teen's left side of his brain, he likely would have had cognitive and speech difficulties.

"I look at him as the very lucky of the unluckiest, to be relatively intact and awake and follow commands through [the ordeal]," Cohen said.

Cohen said a third factor in the boy's favor was the spear did not diagonally penetrate the midline of the brain, which contains a lot of major structures and blood vessels. If the spear had gone diagonally right to left in Yasser's head, "he wouldn't be alive right now," Cohen said.

Yasser's doctors said he could stay at the hospital for up to three months and might face a small risk of infection, but they remain optimistic about his recovery.

"The amazing thing is that he has been able to speak right now with short sentences and to make his needs felt," Bullock told CBS Miami. "His words are amazingly easy to understand. He can for example say that he does not have pain, but he is worried about the fact that he can't use his left side properly."

Rehabilitation from a traumatic brain injury can vary, but usually involves an integrative approach with physical therapy for the body, along with cognitive and occupational therapy to fine tune motor skills and relearn how to process information. The brain however heals slowly, Cohen said, so recovering patients can see progress and plateaus for up to a year.

"He can continue to get better and better, and where he is right now is really a modern miracle," Cohen told HealthPop. "He had a lot of good factors...a perfect storm - he got very lucky."

Here is CBS Miami with more on Yasser's case: