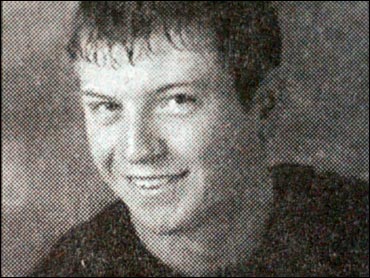 On the morning he was to graduate high school, Scott Moody walked a half-mile to his grandparents' farmhouse and began what authorities say was the first stop in a gruesome murder-suicide that ended in six deaths.

According to investigators, Moody shot his grandparents with a .22-caliber rifle before heading home, where he went from bedroom to bedroom, shooting his mother, teenage sister and two friends before killing himself.

The only survivor — Moody's critically wounded sister — used her cell phone to call for help.

"It's tough on us," Logan County Sheriff Michael Henry said. "We knew these people. We're familiar with these kids. I feel so badly for these families, this community."

The Sunday morning rampage perplexed school officials, who said the 18-year-old seemed to have been in good spirits. The deaths came hours after a family party to celebrate graduation.

Bernie Pachmayer, superintendent for the school district, said no one had seen any indication Moody was troubled.

"In our minds, it couldn't possibly be Scott," Pachmayer said. She said Scott was a "clean-cut boy" who wanted to be a farmer.

Henry identified the victims as Moody's grandparents Sharyl Shafer, 66, and Gary Shafer, 67; Moody's mother, Sheri Shafer, 37; and two friends, Megan Karus, 19, and Paige Harshbarger, 14. Karus and Harshbarger had slept over after the party.

Scott Moody and Karus were to have graduated Sunday afternoon from Riverside High School in nearby De Graff. School officials, who had only minutes of notice about the deaths before the ceremony began, held graduation as scheduled and announced the shootings afterward.

"Everybody was wondering, 'Where are these two kids?'" Pachmayer said. "I think instinctively they knew something was wrong."

The houses where the shootings took place are about a quarter-mile apart along a two-lane state route a mile west of the city of 13,000 people, 45 miles northwest of Columbus. Fields where corn and soybeans are grown surround the white-paneled, two-story homes.

There was no sign of a struggle at either house, Henry said, adding that it appeared Karus, Harshbarger and Sheri Shafer were killed while they slept.

Authorities were alerted to the slayings after Stacy Moody called her stepsister, Nicole Vagedes, telling her that she and her mother had been beaten up and that she could not wake up her mother.

Her voice became more frantic as she told emergency dispatchers about finding bodies throughout the home.

"Oh my God, there's one in the living room. There's another one on the couch," Vagedes told deputies in an anguished 911 call that was released Monday.

Last week, Moody's family had taken out two congratulatory ads featuring Moody's picture in the Bellefontaine Examiner. The ad from his mother and sister read "Good luck and have fun!"