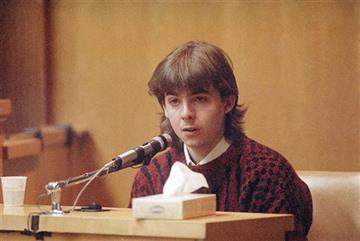 CONCORD, N.H. - The triggerman in the Pamela Smart murder case was granted parole Thursday, nearly 25 years after he killed his school instructor's husband and launched a global spectacle packed with lurid details of sex and manipulation.

William Flynn was 16-year-old "Billy" in 1990 when he and three friends carried out what prosecutors said was Pamela Smart's plot to murder Gregg Smart. He pleaded guilty to second-degree murder and was sentenced to 28 years to life in prison, minus time served before trial.

The trial was a media circus and one of the first high-profile cases about a sexual affair between an instructor and student. It inspired the Joyce Maynard novel "To Die For," which in turn was made into a movie starring Nicole Kidman.

"It's your birthday," Donna Sytek, chairwoman of the three-person state board, told Flynn. "We're granting you the privilege of parole."

The board granted Flynn parole on his first attempt Thursday, his 41st birthday. He has been in a Maine prison and participated in the hearing by telephone, telling the board that he'd always be haunted by the killing.

"I will always feel terrible about what happened 25 years ago," he said. "Parole will not change that."

Pamela Smart, who was 22 when her husband was killed, was convicted of being an accomplice to first-degree murder and sentenced to life in prison without the chance of parole.

She admitted seducing the boy but said she didn't plan her husband's murder.

According to trial testimony, Smart was one of Flynn's instructors in a self-awareness program at Winnacunnet High School in Hampton when she first seduced him. Flynn was 15 at the time. She told him she needed her husband killed because she feared she would lose everything if they divorced.

Flynn testified in Smart's 1991 trial that she threatened to break up with him if he didn't kill her husband. On May 1, 1990, he and 17-year-old Patrick Randall entered the Smarts' Derry condominium and forced Gregory Smart to his knees in the foyer. As Randall held a knife to the man's throat, Flynn fired a hollow-point bullet into his head.

Randall got 28 years to life; he comes up for parole in April. Two other teenagers served prison sentences and have been released.

Pamela Smart has steadfastly denied knowing about the plot. But the state's star witness, a teenage intern in whom Smart confided, secretly recorded her after the killing saying, "If you tell the (expletive) truth, you'll send me to the slammer for the rest of my (expletive) life."

"This never would have happened if it wasn't for Pam Smart," attorney Paul Maggiotto, who prosecuted Smart, told The Associated Press last week. "It was Smart's manipulation of Flynn that caused this crime to occur."

Before the decision was issued, the victim's brother, Dean Smart, read a letter from his 23-year-old daughter, Ashley.

"Mr. Flynn is only in this situation because he decided to play God one night and take an innocent man's life," her letter said. "You singlehandedly destroyed a whole family."

"I hope he does something great with his life," he said.

Flynn said finding a job will be his biggest challenge, noting that employers will know the details of his case when they search his name on the Internet.

"The first they learn about me is the worst thing I've ever done," he said.

A spokeswoman for Pamela Smart, who was transferred in March 1993 to the Bedford Hills Correctional Facility for women, told the AP that Smart took no position on Flynn's parole bid but hopes she ultimately gets the same chance at freedom.