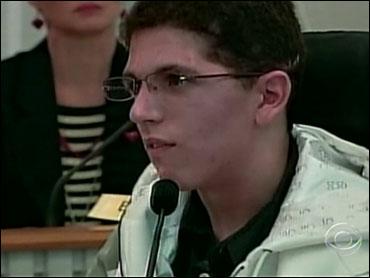 Zackery Lystedt has always been a fierce competitor.

So at 13, when he took a hard hit in a football game he "shook it off," and 15 minutes later was back in the game, reports CBS News correspondent Sandra Hughes. He collapsed on the field.

"I was begging God to keep him alive," said Victor Lystedt, Zack's father.

He spent 30 days in a coma, diagnosed with a second impact concussion.

"One of the doctors was talking to his colleagues and saying, 'Well, he might wake up.' As if it were a rare miracle that he would even wake up," Victor said.

Every day has been a miracle on his long journey out of darkness.

When CBS News first visited Zack two years ago, he was unable to move his legs or speak. He communicated through blinking.

With relentless rehabilitation, his progress has been nothing short of amazing.

"How are you doing?" Hughes asked Zack.

The Lystedts have never known how far Zack can come back. But they are certain of one thing:

"We don't want another family to go through what we're going through," Victor said.

A recent survey of 100 high schools by the Center for Injury Research and Policy at Nationwide Children's Hospital found that of the more than 1,300 athletes with concussions, 41 percent went back in the game too soon.

"It's very important for the brain to have enough time to heal adequately," said Dr. Vernon Williams, the chief medical officer of the Sports Concussion Institute.

That's why Zack's family has been lobbying.

"His purpose I think now in life is to change other people's lives," Victor said.

On Thursday, the family watched as the governor of Washington signed the most far-reaching legislation in the nation to protect kids from concussions.

Zack showed his appreciation like a typical teenager - doing a hand bump with the governor.

Under the Zackery Lystedt law, a youth showing any signs of a concussion will have to get the approval of a medical professional before being allowed to play again.

"It's a great day for us, for Washington and for the country," Victor said.

Supporters want to take this law nationwide, hoping what happened to Zack will never happen to another young athlete.