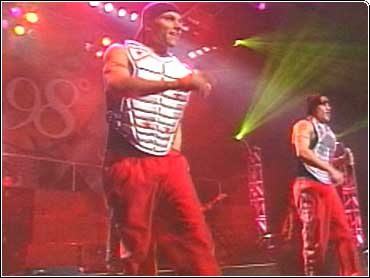 The sizzling sounds and boyish good looks of recording artists 98 Degrees have helped them rise to the top of the charts. But, reports CBS Marketwatch Correspondent Stacey Tisdale, in the music industry, where the average career spans only about 5 years, many lead singers have backup plans.

Younger celebrities say they are avoiding the sob stories of older performers like MC Hammer and Elton John, both of whom have had long careers but nonetheless find themselves in financial trouble.

98 Degrees member Drew Lachey points to the often bleak cable-television profiles of faded musicians. "Anyone who have watched VH-1 Behind the Music has learned from the older generation's mistakes," he says.

Jeff Timmons, also of 98 Degrees, sees a stable future for the group. "We invest in stocks right now and mutual funds and things like that you know. Stuff that's very stable that grows over a long period of time."

Today's young stars are no longer concentrating exclusively on their craft. Many are taking a vested interest in how their finances are being managed, hoping to capitalize on their careers long after the music stops.

Vernon Brown manages the fortunes of many top entertainers and says he hears the same refrain from all his clients. "We always hear that we don't want to end up broke," he says.

Brown says his clients take an active involvement in their investments. "Unlike the past where we were the guiding force telling the clients what we wish them to do and what we thought they should do, clients are now telling us."

Rythym and blues recording artist Mary J. Blige is a case in point.

She envisions a diversified set of investments. "I'm trying to get up and running the record label, that's the first one. The second one is the clothing line, the third one is the restaurant ... [but] I'm taking one thing at a time," she says.

The times they are a-changin', say industry watchers, for younger artists who are taking care of business.