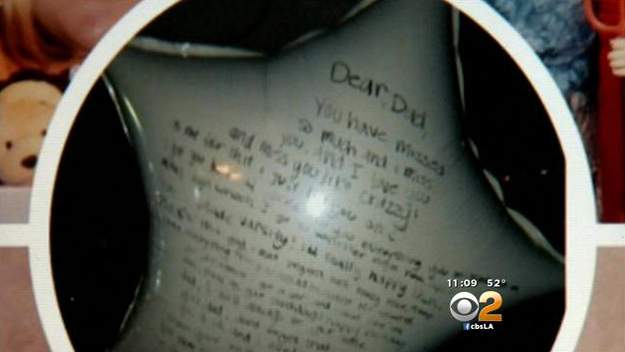 LOS ANGELES -- Almost every year since her dad died of a brain aneurysm in 2010, 16-year-old Ashlynn Marracino has written him a letter on his birthday, January 6.

But as CBS Los Angeles reports, the teenager received an unexpected reply this year, when she was contacted by a woman more than 400 miles away from her Whittier home, where the note, penned on a mylar balloon, had landed just one day later.

"I think it came to us for a reason," said Lisa Swisley, who found the deflated balloon outside her restaurant in Auburn, California - 436 miles away.

"I've been playing softball for 11 years now. Can you believe it? I Hope you helped me out with all those home runs," reads the message to Ashlynn's father. "I don't like how I never had you in my life. It's not fair. Show me a sign please. Anything to let me know you're there. I miss you so much and I want you back."

Lisa and Ashlynn spoke for the first time on Skype Monday evening.

Lisa told her she recently started a "Pay It Forward" Facebook page for her town. She shared the letter, and now cards and packages for Ashlynn are pouring in.

"I told him to show me a sign, and I think this is a sign to not hold grudges and to forgive really easily," Ashlynn said.

The night before he father died, she saw he called and didn't pick up.

It took a balloon, 436 miles and a few strangers to remind Ashlynn what her dad would say if he could.

"That he loves me and and let's not be down or get down on myself," she said.