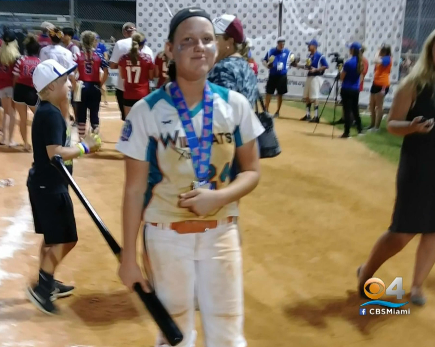 MIAMI -- A South Florida teenager is fighting for her life after a horrific accident on New Year's Eve. Layne Chesney, 14, was in a medically induced coma as of Tuesday night after suffering third-degree burns, CBS Miami reported.

"My daughter has sustained burns over 95 percent of her body," said mother Leigh Chesney. "She has suffered a lot of disfiguring injuries."

"The only part of her body that was not burned was the bottom of her feet," she said.

Layne, a young softball star who was already in touch with college recruiters as a ninth grader, was at a friend's house for New Year's Eve roasting marshmallows for s'mores. The small gathering included her friend's family members.

"When the flames went out, one of the children or her, I do not know the complete story, accidentally or on purpose, put more gas to the fire," Leigh said. "An explosion occurred and she was enveloped in flames."

She was airlifted to Kendall Regional Hospital's burn unit where Leigh Chesney describes her daughter's condition as grave.

Layne's teammates and fellow students held a prayer vigil, and a GoFundMe page has been set up in her name.

"She's going to have a very difficult, long battle," Leigh Chesney said. "She is going to have many, many setbacks. Some days difficult and some days better. They can't make any promises. They are doing the very best that they can."