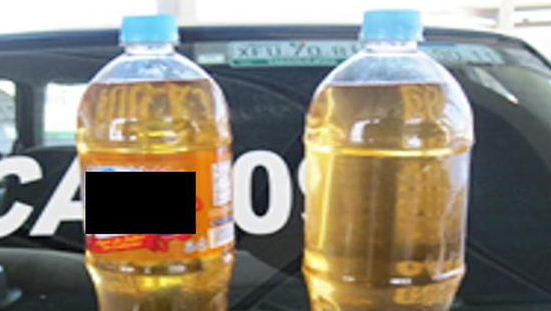 SAN DIEGO - A Mexican high school student died from drinking highly concentrated liquid methamphetamine at a San Diego border crossing in an attempt to persuade inspectors that it was only apple juice, according to an autopsy report released Wednesday.

Cruz Marcelino Velazquez, 16, volunteered to take "a big sip" at the San Ysidro port of entry Nov. 18, the report said. He was then handcuffed and taken to a security office, where he began screaming in pain, said something about "the chemicals," and shouted, "My heart! My heart!" in Spanish, it added.

The San Diego County Medical Examiner's report gives no indication that inspectors asked him to drink the liquid and doesn't say if they had an opportunity to stop him when he volunteered. Velazquez died hours later at a hospital from acute methamphetamine intoxication.

Jackie Wasiluk, a spokeswoman for U.S. Customs and Border Protection, the agency that oversees ports of entry, had no immediate comment on the findings

San Ysidro, the nation's busiest border crossing, has emerged as a major corridor for smuggling methamphetamine in the past five years as Mexico's Sinaloa cartel has increased its presence in the area. To avoid detection, crystal methamphetamine is dissolved in water and disguised in juice bottles, windshield wiper fluid containers and gas tanks. It is later converted back to crystals.

Children are caught with methamphetamine several times a week at San Diego crossings, an "alarming increase," Joe Garcia, assistant special agent in charge of U.S. Immigration and Customs Enforcement investigations in San Diego, said in an interview last year. They are typically paid $50 to $200 a trip.

Velazquez, of Tijuana, raised the suspicions of an inspector in a pedestrian lane, who poured a capful of liquid on a counter because he thought it would immediately crystallize if it was methamphetamine, according to the autopsy report. The inspector smelled fruit and returned the boy's two bottles after the liquid didn't crystallize.

Inspectors also raised questions about whether Velazquez had been working in the U.S., which would violate terms of his visitor's visa, and ordered him to a separate area.  After he was asked again about the bottles, he drank the liquid.

The liquid in both bottles later tested positive for methamphetamine and the capful that the inspector poured on the counter eventually crystallized.

The inspector who poured the capful "was educated by his supervisor that this was not a proper or safe test for detecting methamphetamine," the report says.