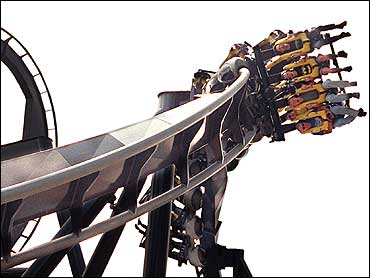 A teenager was decapitated by a roller coaster after he hopped a pair of fences and entered a restricted area Saturday at Six Flags Over Georgia amusement park, authorities said.

Six Flags officials are uncertain why the unidentified 17-year-old from Columbia, South Carolina, scaled two 6-foot fences and passed signs that said the restricted area was both off-limits and dangerous to visitors, spokeswoman Hela Sheth said in a news release.

Authorities were investigating reports from witnesses who said the teenager jumped the fences to retrieve a hat he lost while riding the Batman roller coaster, said Cobb County police Sgt. Dana Pierce. Three security guards were keeping visitors away from the ride on Saturday.

Police said the ride was going full-speed when the teen was struck. The ride's top speed is 50 mph, according to the Six Flags Web site.

No one riding on the roller coaster was injured, Sheth said. The teen's friend also entered the restricted area but was not injured, Pierce said.

The teen and his parents were at the park with a group from the Oakey Spring Baptist Church near Springfield, South Carolina, police said.

In June 2007, a teenager's legs were severed when cables snapped on the Superman Tower of Power ride at Six Flags Kentucky Kingdom in Louisville, Kentucky. Doctors were able to reattach Kaitlyn Lasitter's right foot, but she had to have some of her left leg amputated and subsequent surgeries.

State officials blame a faulty cable and slow response by an amusement park ride operator in the accident. Her family is suing Six Flags Kentucky Kingdom, claiming the park failed to maintain the ride and equipment and ensure riders' safety. The amusement park has denied liability in court filings.