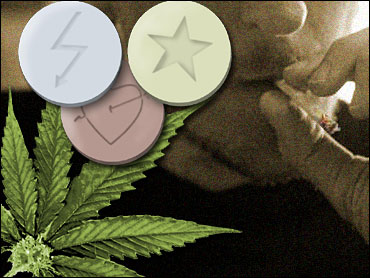 Boredom and a wad of cash can lead young Americans to substance abuse, according to a Columbia University survey released Tuesday.

The study also found that students at smaller schools and those attending religious schools are less likely to abuse narcotics and alcohol.

Young people ages 12 to 17 who are frequently bored are 50 percent likelier than those not often bored to smoke, drink, get drunk and use illegal drugs, said the study by the university's National Center on Addiction and Substance Abuse.

Those with $25 or more a week in spending money are nearly twice as likely as those with less to smoke, drink and use illegal drugs, and more than twice as likely to get drunk, the study said.

High stress can also take its toll — kids suffering from stress are twice as likely as those with low stress to smoke, drink, get drunk and use illegal drugs, results showed. High stress was experienced more among girls more than boys, with nearly one in three girls saying they were highly stressed compared with fewer than one in four boys.

Much of the stress was attributed to academic worries and pressures to have sex and take drugs.

Kids at schools with more than 1,200 students are twice as likely as those at schools with less than 800 students to be at high risk of substance abuse, according to the study, and Catholic and other religious schools are likelier to be drug-free than public schools.

The average age of first use is about 12 years for alcohol, 12 ½ years for cigarettes and almost 14 years for marijuana, the center found.

"This is an alarm call to parents," said Joseph Califano, Jr., the center's president. "You should be aware of what your kids are doing, know your child and don't underestimate your power you have over your children."