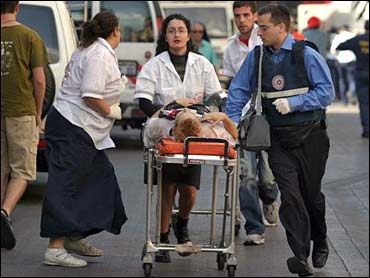 Israel was reacting with uncharacteristic calm after a suicide bombing in Tel Aviv by a Palestinian teenager killed three Israelis — a test of Israel's pledge to show restraint in the wake of Yasser Arafat's illness.

The 16-year-old bomber blew himself up Monday on a narrow street in Tel Aviv's Carmel Market, crowded with simple stalls and stands, scattering bloody vegetables and spices on the ground.

The usual signs of an imminent Israeli military counterstrike were absent this time — the hurried high-level security meetings and troop movements — and it appeared that Israel would not hit back as it has in the past.

Sharon said Israel "will not stop its war against terrorism" and repeated his commitment to unilaterally disengage from the Palestinians, pulling out of the Gaza Strip next year.

"I'm not changing my policy until there are changes in the Palestinian administration and until it stops its incitement and its terror," Sharon said.

Arafat condemned the bombing from his hospital outside Paris, and Palestinian leaders in the West Bank joined in, but the bombing undermined their efforts to show that despite the absence of their longtime leader, everything is under control.

Arafat was flown to France on Friday, suffering from an undisclosed ailment that left him in serious condition. Doctors there have not yet announced results of medical tests.

The army said that during an attempt to arrest five members of the Fatah-linked Al Aqsa Martyrs' Brigades, the wanted men drew pistols. The soldiers fired first, killing three men, wounding one and arresting a fifth, the military said.

The Tel Aviv bombing, which killed three and wounded 32, was the 117th suicide bombing since the outbreak of Israeli-Palestinian fighting in 2000 and was the first since Arafat left for France last week. In all, 494 Israelis have been killed in the attacks.

The Popular Front for the Liberation of Palestine, a radical PLO faction, claimed responsibility, identifying the assailant as Eli Amer Alfar, from the Askar refugee camp near the West Bank city of Nablus.

Alfar was only 16 years old, one of the youngest Palestinian suicide bombers, and his parents lashed out at the militants who recruited him.

"It's immoral to send someone so young," said Samir Abdullah, 45, Alfar's mother. "They should have sent an adult who understands the meaning of his deeds."

The blast came at a time of growing concern about instability during Arafat's absence. Militants appeared to be trying to signal they are in charge, not Arafat's stand-ins who have been trying to convey a sense of normalcy in Palestinian politics.

Frustrated by Israeli security measures that have greatly reduced their effectiveness, militant groups have turned to using women and teenagers to transport explosives and carry out attacks, hoping they would raise less suspicion at the dozens of Israeli checkpoints designed to capture bombers and other militants.

Also, Israelis say the contentious barrier they are building along the West Bank, which is one-third completed, has significantly reduced the bombings by making it harder to infiltrate from the West Bank into Israel. Only 12 of the 117 suicide attacks since September 2000 have taken place in 2004.

Use of children and teenagers has evoked criticism of the militant groups. On Nov. 3, a 16-year-old blew himself up an at Israeli army checkpoint.

In a highly publicized event on March 24, soldiers at a checkpoint stopped a 16-year-old wearing a suicide bomber's vest. Cameras recorded him stripping his shirt off, revealing the bomb, and soldiers directing him how to remove it safely.

A few days later, a 15-year-old boy told his family he had been recruited to carry out a suicide bombing, but his older brother stopped him.

Alongside criticism by relatives of young bombers, a group of Palestinian intellectuals earlier this year issued a public statement calling on militant groups to stop recruiting children and teenagers.