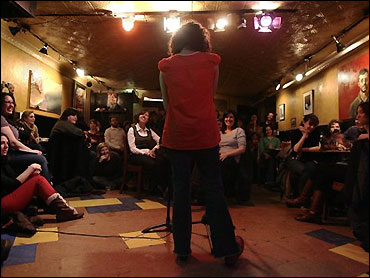 The year was 1987, the boy's name was Rob, and 13-year-old Ingrid Wiese had some pressing concerns.

"He kisses weird," she wrote in her diary. "I just hope it doesn't stick and I don't end up kissing like that forever."

Twenty years later, Wiese hauled the diary out of storage and read it to a bar full of strangers just for laughs.

"Cringe readings," these exercises are called, and they are growing in popularity around the country.

Groups in New York and elsewhere convene to relive what most would rather forget: the depths of their teenage angst. Participants get up on stage with their ragged, old diaries and are instructed to read only material embarrassing enough to make them cringe.

It turns out that embarrassing is also funny. When Wiese appeared at the reading, held monthly at a Brooklyn bar, the room was packed beyond capacity. The 33-year-old fundraiser may have been cringing, but her audience was cheering.

"When most people hear about it they think, 'Oh, God, that would be just absolutely humiliating, I would never do that,' " said Blaise Kearsley, another reader. "But I think there's something so universal about your adolescent diaries and your poems and your school assignments. It's just stuff that everyone can relate to."

Indeed, as readers spoke about zits and boys, sex and death, they heard plenty of knowing laughter.

Perhaps only teenagers or former teenagers could follow this diary entry, written by a 14-year-old Kearsley in 1987:

"When we got to the dance, Erin was depressed because she likes John and he spent the whole night dancing with Ada. But Ada was upset because at the end of the dance John frenched her. And number one: she likes him but she doesn't know if she likes him in THAT WAY. And number two: John is good friends with Dan, her ex, and she knows that Dan will have something to say to John about this."

The Brooklyn event was started by a local administrative assistant, Sarah Brown, who in a momentary, drunken lapse started reading her old diaries to friends — and discovered they had finally become more funny than painful.

The monthly cringe reading has since landed Brown a book deal and a pilot for cable television's TLC, allowing the 29-year-old to quit her day job. Similar events are happening around the country in Los Angeles, San Francisco, Chicago, Milwaukee and Seattle.

"When you're a teenager, everything is the same level of intensity," Brown said. "They read about boys, or girls, or their parents, or their friends, or school, or something serious like, you know, a divorce — but ... there's no change of tone."

While the readers try to keep it light, plenty of the material in their diaries is dark, heart-wrenching stuff.

"Why? Why do you think someone could really love you?" a now-grown Ingrid Wiese reads to the crowd.

"You're fat, out of shape, covered with zits. You can just feel how your body is GOING. Your arms, your wrists, your calves. You're insecure, immature, and" — she lowers her voice to a whisper — "your grades reflect your intelligence."

The 33-year-old Wiese says it's enough to make her wish she could somehow give that insecure girl a hug.

"I just want to go back and tell that kid so many things, but mostly that 'you're just all right the way you are,' " Wiese said after the reading.

These days, Wiese's emotions are less heightened, and she carries herself confidently as she walks from the stage. Still, some things never change.

"Of course!" she says when asked if she still obsesses over boys. "And I write all about it on my blog."