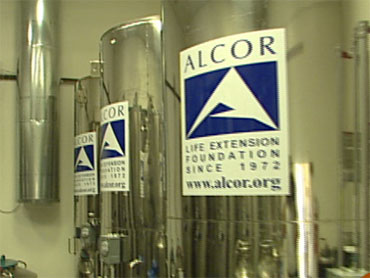 Its believers hope that, one day, those remains can be bought back to life.

Now, a former employee of the nation's largest cryonics center is speaking up, claiming he witnessed bizarre and unbelievable acts while he was working there.

The Scottsdale, Ariz.-based Alcor Life Extension Foundation is the worldwide leader in cryonics. Its lab is said to house corpses, including the remains of baseball great Ted Williams -- frozen to minus 321 degrees, all at a cost of about $120,000 each.

Larry Johnson, a former chief operating officer at Alcor, says in a new book that Williams' corpse was mistakenly decapitated and gruesomely mistreated.

Through internal documents, photos and secretly recorded conversations obtained by Johnson, he also alleges the company participated in the premature deaths of two Alcor clients, who were close to dying.

In one recorded conversation, Johnson is head asking, "So, what did he do? Did he just..."

And the response Alcor Vice President Joe Hovey is heard giving is, "He killed her."

Alcor denies any wrongdoing and released a statement about the claims made in Johnson's book. In part, it says, "Alcor is a non-profit organization, a pioneer in the field of cryonics and categorically denies the false allegations contained in Mr. Johnson's book."

On "The Early Show" Thursday, Johnson explained to co-anchor Harry Smith that, "Typically, what would happen is they would have a member, a member of Alcor, would pass away, would die. They would bring that individual to the facility and begin the cool-down process. Depending on what option you would take depends on what they'd do to you. If you take the whole-body option, they freeze your whole body. If you want just the head-only option, they just freeze the head."

So it was quite common for them to decapitate the corpses?

Saying, "I saw his (Williams') head," Johnson asserted that, "What happens is they had had his head in one -- looked like a freezer chest ... and it was malfunctioning, there were some issues. So they wanted to move his head into another vessel to lower the temperature of his head down it minus 321 Fahrenheit, so they went to put his head in that vessel. Obviously, the head's round, it's not gonna sit upright.

"So, they got a tuna fish can, and they put it in the bottom of that vessel. They set the head on top of the can and then filled the vessel with liquid nitrogen. Well, obviously, after two or three days of being in that state, when they pull you out, that can is stuck to the top of the head and in Williams' case, that's exactly what happened.

"They pulled him out, the tuna can was stuck on the top of his head, a technician grabbed a monkey wrench, took a swing at the can, missed it, missed the can, hit the head, drew back again, (took) a second swing, hit the can, sent it flying across the room."

Smith remarked that, "You allege in the book there were some people who were prematurely passed on, with the aid of Alcor employees."

"Absolutely," Johnson replied. "I have knowledge of two. I have solid evidence of one in the form of tape recordings. I wired myself to get that on tape that they were actually euthanizing... "

Alcor's statement also said it, "condemns the gross insensitivity of news media in presenting Mr. Johnson's stories as newsworthy, desecrating the memory of Ted Williams to the great upset of his family, who were devastated in a New York courtroom on Monday when learning sales of Mr. Johnson's book would go forward."

Johnson stuck to his guns, telling Smith, "They're gonna claim that, because they've got an awful lot to hide. And it's in the book."

Then, Johnson revealed he's been living in "fear of my life. They're fanatics. They've given me death threats, they've followed me from state to state, leaving notes on my vehicles. Basically saying, you know, 'We're gonna do away with you.' "

Smith remarked, "If this was all true, the thing I find hard to believe, wouldn't prosecutors be beating down their doors to find some sort of malfeasance if all of what you say is true?"

"You would think so," Johnson responded. "And I'm hoping, now that this book is out, this book allows me a certain level of protection, I hope. And I hope this does call the lawmakers' attention to what's going on in there, and they really do need to be investigated."

To read an excerpt of "Frozen: My Journey into the World of Cryonics, Deception, and Death," by Larry Johnson and Scott Baldyga, click here.