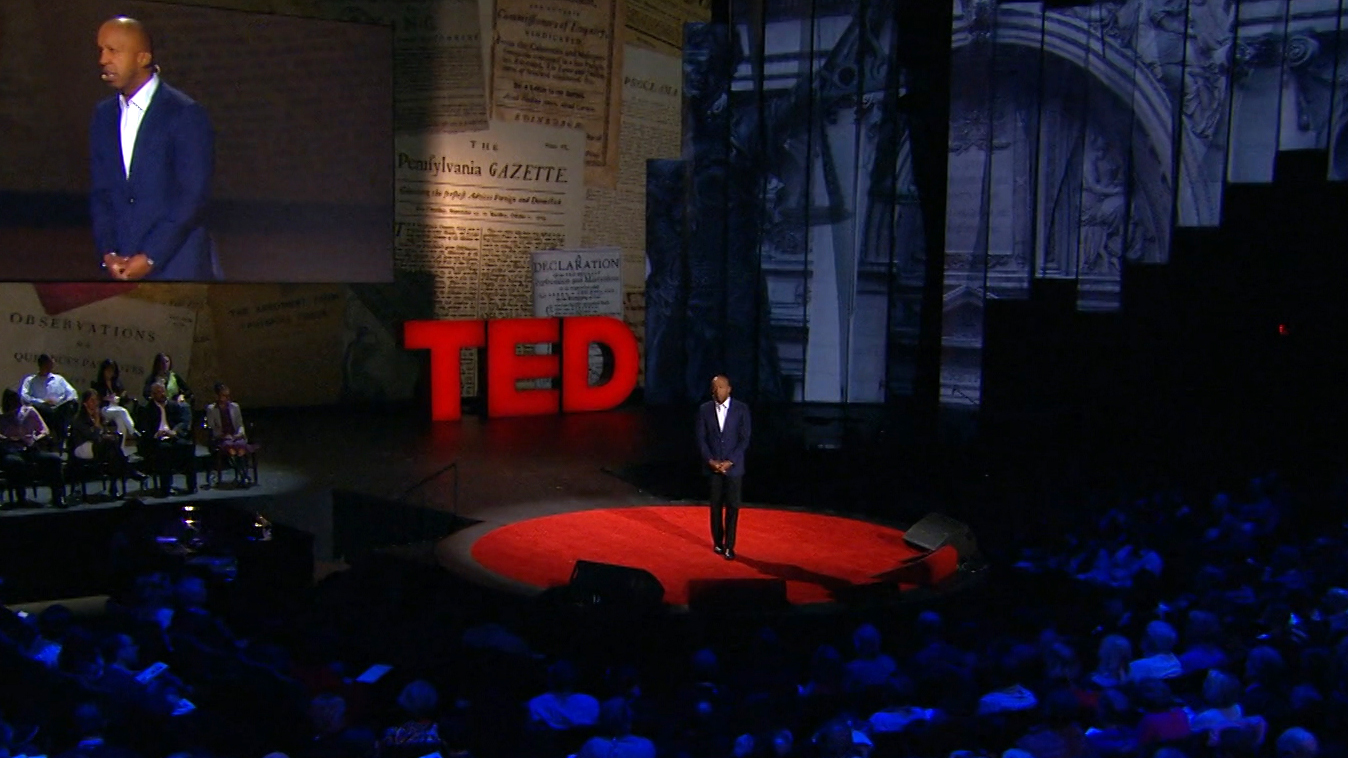 The following script is from "TED Talks" which aired on April 19, 2015. Charlie Rose is the correspondent. Henry Schuster, producer.

It has become a place where big ideas find a global audience. It is known simply as TED. And TED Talks are little presentations that anyone can watch online for free. There are TED Talks on almost every subject you can imagine: building your own nuclear reactor; stopping cyberbullies; exploring Antarctica; a better way to tie your shoes. But what sets TED Talks apart is that the big ideas are wrapped up in personal stories and they're mostly from people you have never heard of before. And it is those stories that have captured the imaginations of tens of millions of viewers around the world. Giving a TED Talk can be life-changing even if some speakers don't always realize what they're getting into.

Bryan Stevenson: I'd never heard of TED and didn't know what a TED Talk was.

But Bryan Stevenson was exactly the sort of person the people at TED wanted.

He was an attorney who'd spent years trying to reform the criminal justice system. They thought he'd have a lot to say. He said yes, then remembered a serious conflict on his calendar.

Bryan Stevenson: It was scheduled two weeks before I had an argument at the U.S. Supreme Court. And I told one of my young staffers, somebody named TED wanted me to come and do a TED Talk and I told them no. And my staffer went crazy. Said, "What are you talking about? You have to do a TED Talk."

Charlie Rose: And what did they say, though, to convince you?

Bryan Stevenson: This is really a big deal. It's an incredible platform. You should absolutely do it. Everybody watches TED Talks.

[Bryan Stevenson: --being here at TED and seeing the stimulation...]

In March of 2012, Bryan Stevenson took the stage at the annual TED conference in Long Beach, California. He was one of more than 60 speakers that week.

[Bryan Stevenson: We have a system of justice in this country that treats you much better if you're rich and guilty than if you're poor and innocent. Wealth, not culpability, shapes outcomes.]

He made the case for changing the criminal justice system, with the same mixture of passion and logic that he uses to persuade judges and juries. He introduced his equal justice initiative in a disarmingly personal way.

And with that, he had them.

[Bryan Stevenson: I've simply come to tell you, keep your eyes on the prize, hold on. Thank you very much...]

Charlie Rose: When you ended it did you think you'd done a good job?

Bryan Stevenson: People were very enthusiastic and responded in a really wonderful way.

Charlie Rose: That's what we call a standing ovation.

The crowd also offered financial support, which was unprecedented, since TED Talks are not about raising money.

Bryan Stevenson: Some people came up to me and they said, "You know, we think that what you're doing is really quite extraordinary. There are a lot of people in this room who want to support you." And I had to leave.

Charlie Rose: You had another engagement in Seattle?

Bryan Stevenson: I did. And so I said, "Well, I can't stay." And much to my amazement, we raised a million dollars.

Charlie Rose: And this is happening without you there.

Bryan Stevenson: Without me there, yeah, exactly

Charlie Rose: And what difference did raising a million dollars at an event that you knew nothing about make for the cause that you devoted your life to?

Bryan Stevenson: Hundreds and hundreds of people were now going to have a chance to get fairer sentences.

Charlie Rose: And it didn't end at the speech, because you have this thing called the Internet?

Bryan Stevenson: Yes, that's exactly right. Even now, I get lots and lots of people who are responding to the TED Talk.

[Chris Anderson: You're an inspiring person...]

The person who put Bryan Stevenson on the stage was Chris Anderson --the man who runs TED. He chooses the speakers; he hosts TED conferences; and he decides which talks go online.

Chris Anderson: There are numerous brilliant people out there and they've come up with something really important. And so part of the way we see our role is to help them make their knowledge accessible.

Charlie Rose: It's a campfire in part, isn't it?

Chris Anderson: It is a campfire. Someone stands up, everyone's eyes are upon them, they tell a story.

The story of TED began with a small conference in the 1980s where bold new ideas were presented about technology, entertainment and design -TED for short. Anderson was a successful magazine publisher. He attended his first TED conference in 1998 and fell in love with what he heard there and so he bought TED -- and turned it into a nonprofit organization.

In 2006, as something of an experiment, he put a handful of conference talks online. The reaction was almost immediate.

Chris Anderson: We started to get emails that said things like, "I'm sitting at my computer screen crying."

Chris Anderson: And a passionate connection. Like, these talks had got inside people's heads and changed them.

[Jill Bolte Taylor: So, this is a real human brain...]

One of the earliest TED Talks posted was literally about what was going on inside the head of neurobiologist Jill Bolte Taylor.

A million views turned into a billion and now it is an Internet phenomenon. There are all sorts of TED conferences being held around the world daily.TED started its own website, TED.com. It has 2,000 talks on just about every subject imaginable.

[Speaker: I can tell you with great confidence, I've been to the future...]

[Speaker: I am 17 years old and I am a nuclear physicist.]

It's something of an intellectual variety show and it is free.

It was front page news when Monica Lewinsky recently gave a TED Talk on cyberbullying.

Charlie Rose: How does Chris Anderson decide who gets the opportunity?

[Auditions: Countless men around the world...]

Anderson and his team spend much of their time auditioning.

[Auditions: It's become a common complaint.]

And looking for the next great story.

[Auditions: For the past two years, I've spent thousands of hours working with invasive breast cancer cells in the lab.]

A great TED Talk demands careful planning. Most speakers get months of preparation and coaching.

[Speaker: Changing slightly that core question may make the rest of the talk land a bit more clearly.]

There are a few rules - there is no selling of a product or a book from the stage; no pseudo-science is allowed; and there is an 18-minute time limit.

Chris Anderson: It's a natural human attention span. It's an extended coffee break. You can listen to something serious that long without getting bored or exhausted.

The goal is to make it to a TED conference and then get your talk posted online. Speakers do not get paid. Yet people line up for the chance to make a TED Talk. They hope to be the next Amy Cuddy.

She was a largely unknown psychology professor at Harvard, until she took the TED stage in 2012.

Cuddy's talk was about her research into non-verbal communication, but it was her personal story that captured the imagination of the audience.

[Amy Cuddy: When I was 19, I was in a really bad car accident. I was thrown out of a car and I woke up in a head injury rehab ward, and I learned that my IQ had dropped by two standard deviations.]

She agonized about revealing she had suffered a traumatic brain injury in that car accident.

Amy Cuddy: I felt deep ambivalence and also what have I done?

Amy Cuddy: Yes, have I changed my life in a way that I'll regret? Will people be judging me? Will my colleagues think I'm stupid? The head injury story was really, really personal and it was something that I had mostly kept locked away.

Charlie Rose: This is the most watched TED Talk in the last two years.

According to Chris Anderson, she's had more than 23 million views. It has turned Amy Cuddy into a star in this new TED-created universe. She's hot on the lecture circuit and has a new book coming out. Chris Anderson and TED can make someone's career.

Charlie Rose: Do you like the power that it gives you?

Chris Anderson: I don't think in terms of power usually--

Charlie Rose: It does give you power. You can sit there and change somebody's life by putting-- making them a TED speaker. If you make those choices, then you have power.

Chris Anderson: Well, I would phrase it more as responsibility, but a joyful one. I do love the fact that someone can give a talk, and a few months later can be known by millions of people around the world--

She's a comedian and when she appeared on the TED stage a year and a half ago, she had a punchline...

And she had a serious point.

[Maysoon Zayid, People with disabilities are the largest minority in the world, and we are the most underrepresented in entertainment.]

She also had an agenda.

Maysoon Zayid: I actually thought that once the talk was done, my career would skyrocket. I want to be on TV. And I thought that the TED Talk would open the door for more real-life opportunities with me.

Charlie Rose: And that's what TED did not do?

Maysoon Zayid: And that's what TED didn't do. But what it did do is it amplified my voice worldwide.

With more than six million views of her talk -- which was translated into several languages, she believes she's succeeded in a different way.

Maysoon Zayid: I didn't expect to hear from so many people that felt the talk was about them.

Charlie Rose: How did you change the lives of people who are disabled?

Maysoon Zayid: I think the change occurs mostly on an individual basis. What I think I've done is help people go out there and say, "I have a disability. I shake all the time. It's totally fine. You need to treat me as an equal, even if physically, I'm different than you." And I think what I've done is really empower people to be proud of who they are.

Critics of TED - and there are some -- believe that this emphasis on the personal stories has turned TED Talks into infotainment, offering easy answers to serious problems. But don't count Bryan Stevenson among the skeptics. He traces part of the current public debate about reforming the criminal justice system back to the TED Talk he gave in 2012. And while he's grateful for the money that TED raised, he's even more appreciative of the platform.

Charlie Rose: Did your experience at TED change you in any way?

Bryan Stevenson: Well, it did. It made me more hopeful about what can be achieved if you change the narrative.

Charlie Rose: Is there something about TED you wanna change?

Bryan Stevenson: I think the challenge is getting people who consume all of this wonderful stuff that TED provides to not just be consumers, but to take what they learn and know and hear and turn it into some kind of action that may be a little uncomfortable, that may be a little inconvenient, but will absolutely be transformative to making these great ideas really ideas that not only spread but create a greater world.