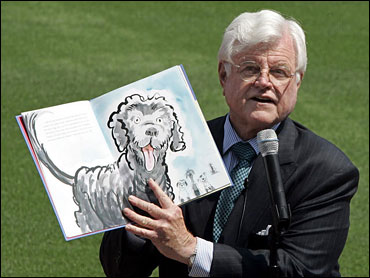 It was a dog day at Fenway Park as Senator Edward Kennedy and his Portuguese Water Dog, Splash, visited the old ballyard Wednesday for a school reading event.

The senator read a portion of his new children's book, "My Senator and Me: A Dogs-Eye View of Washington D.C.," to a group of Boston-area school children.

The picture book takes readers through a day in the life of the senator, told from the perspective of Splash.

Joining Kennedy was Red Sox outfielder Gabe Kapler, who is recuperating from a torn Achilles tendon. Kapler swapped his baseball bat for a tennis racket and hit tennis balls toward the "Green Monster" for Splash to fetch.

Not a bad photo-op for the Democratic Party stalwart, who is doing something very familiar: running for re-election.

He's been in office since 1962 but the 74-year-old senator is taking nothing for granted.

This fall, Kennedy faces a little known Republican challenger, Belmont language school owner Kenneth Chase. But the stakes could not be much higher for the Massachusetts Democratic Party, which is trying to regain control of the governor's office for the first time since 1991.

On Friday night, Kennedy addresses the Democratic State Convention in Worcester, and the party is hoping some of the famous Kennedy family legwork pays dividends across the fall ballot.

"They're the backbone of the Democratic Party. I don't think we would be successful without them," said Philip Johnston, chairman of the Massachusetts Democratic Party, whose offices are next to Kennedy's campaign headquarters.

During the August congressional recess, Kennedy also expects to barnstorm the state, an effort that will continue nationally this fall on behalf of Senate candidates, and across Massachusetts on behalf of the Democratic gubernatorial nominee.

"Political leaders say that 'this is the most important election of their lifetime,' and I've certainly have thought when I campaigned in other elections that was true," Kennedy, 74, told The Associated Press in an interview. "That really is true with this election, because of the leadership we have at the presidential level and in the Senate and House of Representatives."

Kennedy is seeking his eighth full term after a career that began when he won the Senate seat once held by his late brother, President John F. Kennedy.

To date, Kennedy has: