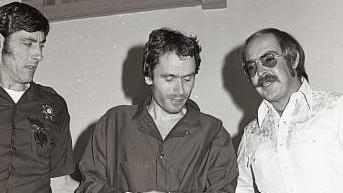 GLENWOOD SPRINGS, Colo. -- A Colorado newspaper has discovered 40-year-old photos of serial killer Ted Bundy that were locked in an antique safe in the newsroom, recalling anxious times in 1977 when Bundy escaped from local law enforcement agencies twice in six months.

The long-forgotten images were found at the Glenwood Springs Post Independent, the newspaper reported Monday.

They were taken when Bundy was awaiting trial on a murder charge in Colorado. He was also suspected of murders in Florida, Utah and Washington and was eventually executed in Florida in 1989. Before he died, authorities said, he confessed to 30 killings across the country.

It’s not clear when the photos were placed in the Glenwood Springs safe, which was being used as a table in the newsroom. No one currently at the newspaper knew the combination, or what was inside, but local locksmith Wayne Winton was curious when he spotted the safe and volunteered to crack it.

Inside were some documents, a little cash and envelopes containing negative film, one marked “Bundy Capture.”

Bundy had been arrested in Utah in 1975 and was convicted the next year of kidnapping a woman there. He was then brought to Colorado to face murder charges in the death of a woman who disappeared from a ski resort in Aspen.

On June 6, 1977, he was at the Pitkin County Courthouse in Aspen, researching in the law library because he planned to defend himself. He jumped out a second-floor window and fled.

Bundy was recaptured a few days later and was being held in the Garfield County jail in Glenwood Springs, about 40 miles northwest of Aspen. But on Dec. 31, 1977, he escaped again after sawing a hole in the ceiling of his cell.

Bundy was re-arrested in Florida in February 1978 and charged with the murders of two women and a 12-year-old girl, all killed in the weeks after his second Colorado escape.