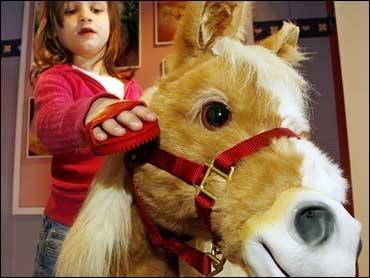 You better watch out: this holiday shopping season could be one of the priciest ever as tech-laden and expensive gifts for kids of all ages, from the $299 animatronic pony Butterscotch to a $300 pinball machine, show up under the tree.

Even if Santa doesn't have enough of the elusive $500 Sony PlayStation 3 to go around, there's still Hasbro's $249 Nerf Showtime Hoops, a basketball "gaming system" with an electronic scoreboard and a recorded voice that will announce whether your child has launched a "brick" or hit "nothin' but net!"

Or you can go to Wal-Mart Stores Inc. to pick up a red Ford Mustang Power Wheels, a $250 battery-operated car for children age 3 and up. The Mustang is a Wal-Mart exclusive made by Mattel Inc.'s Fisher-Price division, though many other models can be found at other retailers, such as Toys "R" Us.

Toys have gotten more expensive for several reasons, industry executives and analysts say. The demand is there: Parents have shown a willingness to spend more on children's gifts. Meanwhile, toy companies are able to make more sophisticated toys as computer chips and robotics get cheaper. The companies can then charge more for those high-tech toys.

Higher prices don't seem to be holding back sales. "I would say that Butterscotch has exceeded our expectations," McCall said, referring to the newest member of Hasbro Inc.'s "Furreal Friends" product line.

Chris Byrne, a contributing editor for Toy Wishes, a consumer publication, said that expensive toys have always been available at high-end stores such as FAO Schwarz, which emerged from bankruptcy protection two years ago. What's notable this year is that mass-market retailers like Wal-Mart Stores Inc. and Target Corp. are stocking their shelves with more toys costing $200 and above
than ever before.

One factor behind the trend is the global decline in the price of high-technology parts, such as computer chips and robotics. That allows toy makers to offer sophisticated toys at surprisingly low prices considering what the toys can do.

The "Butterscotch My Furreal Friends Pony," for example, is three feet tall with moving eyes, ears, head and tail. The pony can whinny and snort and can be "fed" a carrot, and if a child sit on her she will "gently bounce," the company said.

"There's a lot of technology, chips and capacity sensors ... that the kid's not interested in ... but that makes the pony feel very real to them, and that's magic, and the Mom sees value in that," said Sharon John, general manager of Hasbro's Tiger Electronics division.

Butterscotch follows the animatronic Furreal Friends cat, dog and gorilla, John said. The idea for a pony came partly from consumer research. "What little girl doesn't dream of having her own pony?" John asked.

For older children, the so-called "tweens" in the 9-to-12 age group, toy makers are offering higher-priced products that mimic adult high-tech gadgets, such as cell phones, DVD players and even video cameras.

For example, Hasbro's ChatNow is a $75 two-way radio communicator that looks like a flip-style cell phone and comes with colorful stickers and faceplates. It even allows users to take and store up to 30 digital photos.

Then there's the $249 Zoombox projector, which can connect to DVD players and video consoles. It projects movies and games on walls or ceilings with images as large as five feet across.

For kids of all ages, including those who are only kids at heart, Zizzle LLC, a two-year-old toy company, has introduced a freestanding pinball machine that it expects to be almost as popular among adults as children.

The Zizzle pinball game, like the Zoombox, illustrates another aspect of this year's pricey toys: in many cases they're cheaper than the full-blown adult alternatives.

Scott Goldberg, public relations and promotions manager at Zizzle, said their pinball machine has the bumpers, flippers and flashing lights of a real pinball game - unlike the cheaper tabletop versions - but at a much lower price. An arcade-style pinball game is likely to cost thousands of dollars, he said.

One holdover from holidays past is that many parents consider the educational value of some toys a good reason to splurge. But we're far from the erector sets of old: Lego is selling the $249 Mindstorm NXT, a wireless-enabled robot that kids can program over a computer.

Lynda Weber, 46, settled on a Mindstorm for her 11-year-old son, Max, while shopping recently at a Lego store in McLean, Va. She said she strongly prefers hands-on toys like the Mindstorm over video-game consoles.

"He has to build it, he has to figure out how it works, he has to use his hands," she said. "It'll be Santa's big present."