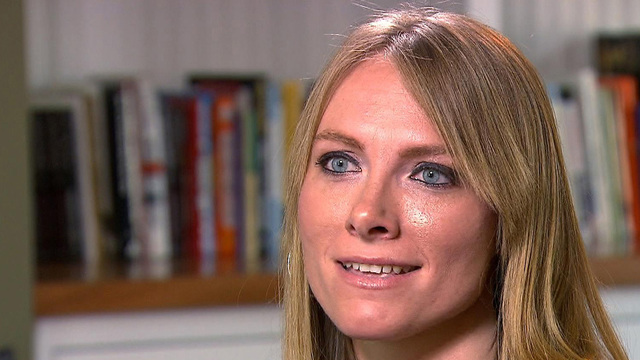 Romance novels continue to top the best-seller lists. New authors from the world of self-publishing are being wooed by literary giants, and the latest is Meredith Wild.

She's a tech CEO-turned-writer, who released her first novel as an e-book just two years ago.

Wild graduated with a degree in English from Smith College, but decided to pursue a more lucrative career developing software. Nearly a decade would pass before she'd write her first book, and now, with a sixth title on the way, Wild's name is being heralded among the hottest in adult fiction, reports CBS News correspondent Michelle Miller.

"I do blush a little bit sometimes when I'm writing. 'Cause I'm like, 'Oh, my gosh, this is a little crazy,'" Wild said.

Her husband, Jonathan, is her first reader, she said.

Before Wild was writing adult fiction, she was a fan of the genre.

"I got on the 'Twilight' bandwagon. I read 'Fifty Shades.' And I just started reading a lot more romance. And-- I just at some point, I stopped and I thought to myself, 'I think I can do this,'" Wild said.

At the time, Wild was working as the CEO of a small software company and she wanted to see characters that were more relatable.

"I really thought to myself, 'I think women want to read about strong female characters.' And that was the story I wanted to read. And it's what I felt was lacking in a lot of what I was reading," Wild said.

Wild used her tech savvy to self-publish online, while her husband helped her promote the books through social media.

"I was familiar with what you had to do to get traditionally published. But I wasn't really willing to wait for somebody to tell me that they were good enough to publish. And I just-- you know, I'm a bit of a soft starter anyways. So it never really occurred to me to take that path," Wild said.

Her path paid off and after she released "Hard Limit," the fourth book of her popular hacker series, Wild was number one on the New York Times Best Seller list for e-books.

"It meant a lot. I'm certainly, you know, not the first person to be thrilled to hit that milestone. But having hit it without the assistance of a traditional publisher really meant a lot to me," Wild said.

Success allowed Wild to re-consider her publishing arrangement and in March accepted a $7 million deal from Grand Central Publishing, which will release "Hardlove," the fifth and final installment of her hacker series this fall.

For her family, her success gives them the freedom they didn't have before.

"I was doing well with the books before this book deal. But it definitely gives me some freedom...I have a lot of other stories planned that I haven't had a chance to get to," Wild said.

Laughing, she said she might have to come up with a different pen name.

Of course a good pen name helps when it comes to attending those PTA meetings, which is also one of the reasons we agreed not to reveal Wild's real name.