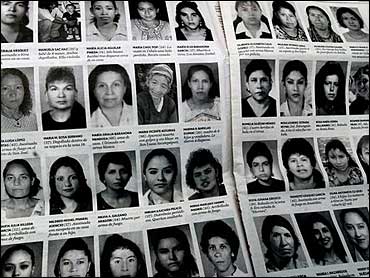 Some are victims of gangs, others of domestic abuse. Many are simply in the wrong place at the wrong time.

More than 300 women have been murdered in Guatemala since January, compared with 250 killed in all of 2003 and 184 in 2002, according to local media and the National Statistical Institute.

U.N representatives visited last year and expressed concern. Women in both Guatemala and Mexico have called on the government to stop the wave of violence.

The murders may appear random, but women's rights advocates also blame laws that are stacked against women, especially victims of domestic violence, and a culture that lacks respect for women.

"The form of expression is rage and hate," said Andrea Barrios, of Guatemala's Legal Action Center for Human Rights. The women "have been tortured, raped, mistreated."

Prosecutor Sandra Zayas said many women are killed by people they know, such as spouses or boyfriends they have previously reported to police for abuse.

Women abused by someone they know can get no physical police protection. Women's rights advocates have long demanded a change in the law so that offenders can to be put in jail.

Nearly a third of all female homicides in Guatemala City are related to domestic violence.

Carolina Claveria was fatally shot in January, and left to die in a fast-food restaurant bathroom. Her ex-boyfriend, who had been in trouble for attacking her before, was arrested.

Zayas argues the overall spike in female killings is simply a reflection of the growing violence in Guatemala, where people in small towns often take the law into their own hands and a culture of violence still persists eight years after peace accords ended 36 years of civil war.

One recent victim, 20-year-old Brenda Garcia, was found fatally shot on August 3 in front of the factory where she worked as a secretary. Police have no idea why she was killed.

Officials hope to slow the violence by appointing more prosecutors. Right now, 10 attorneys handle a monthly average of 1,500 cases of crimes against women — from homicide to assault.

Others say penalties must be increased. Rosa Franco, whose 17-year-old daughter was tortured, raped and killed in 2001, refuses to stop fighting for justice.

The killers "should go to jail, for at least 50 years," she said.