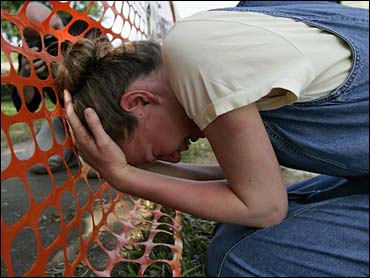 Terri Schiavo's death was met with sadness, anger, despair — and prayers — by supporters of her parents who had held a 13-day vigil outside her hospice.

Since March 18, when Schiavo's feeding tube was disconnected, a cadre of fervent demonstrators had gathered outside Woodside Hospice to protest. Some stayed round the clock, sleeping in tents or sleeping bags.

Thursday morning, people burst into tears and threw down the signs they had been carrying as word spread that Terri Schiavo had died. Many seemed lost at the news that the miracle they had hoped for had not come.

"You saw a murder happening," said Dominique Hanks, who had ridden her motorized wheelchair around the hospice every day since the tube was removed.

"Everybody who denied her right to live are accomplices to murder, and God knows," Hanks said.

"I'm glad it's over and we can get back to normal," said Emerson, 71, who uses a wheelchair and has battled heart and lung problems and a stroke. "It's been difficult for everyone. I'm sure she's happier right now."

Schiavo died around 9:05 a.m. Thursday, said George Felos, the attorney for her husband, Michael. Court-appointed doctors had ruled that she was in a persistent vegetative state, with no real consciousness or chance of recovery. Schiavo argued that his wife told him long ago she would not want to be kept alive artificially. His in-laws disputed that, and argued that she could get better with treatment.

News of the death did not filter into the crowd until nearly an hour later, and protesters blowing ram's horns and saying the Rosary continued their vigil, not knowing that she already was dead.

Upon hearing the news, Patrick Bautch, of Milwaukee, disgustedly tossed away a sign that said "President Bush, Please Help Terri."

"He could have done something," Bautch said. "He was supposed to be for life and he neglected his role. ... The value of human life has just gone down the drain."

A few feet away, a small group burst into hymns, singing the traditional song "How Great Thou Art" as Richard Jacobson, of Corning, N.Y., accompanied them on a tarnished trumpet.

Jacobson, who has been playing religious and patriotic music outside the hospice for the past three days, said he didn't really believe that Terri was dead.

"I'm not believing the report of man," he said. "God will raise her from the dead, and all the world will see it."

After the announcement, Mike Stafford, of Hollywood, Fla., stood before police — who had arrested more than 50 people trying to bring water to Schiavo — gave the Nazi salute and shouted "Heil Hitler."

Harvest Bashta, 15, of Chicago, sat on the grass outside the hospice, her face buried in her hands, tears rolling down her arms and splashing on the open pages of her Bible. After hearing of the death, she said the passage "Whose report shall we believe" kept running through her mind.

"I just don't want to believe it, but if it is true, it is a very sad day for our nation," said the high school sophomore, who dedicated her spring break to join the vigil.

"It grieves my heart to know that God's heart is grieving. God's desire's never to have death happen unjustly," Bashta said.

Kathy Dorrell, 33, from Temple, Ga., has been at the hospice since Saturday with her husband and baby daughter.