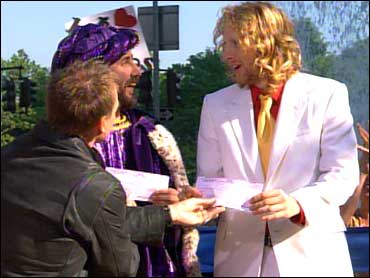 In the end, brains won out over brawn.

The hippies were hip enough to wind up on top in the ninth edition of "The Amazing Race."

In an exciting finish, the popular and fun-loving BJ and Tyler topped "Frat Boys" Eric and Jeremy.

Eric and Jeremy continued to dominate, but BJ and Tyler held tight and passed them during the last flag challenge.

Dating couple Ray and Yolanda seemed to be in third place the whole episode and couldn't get it together.

All three teams made their final pit stop on The Early Show Thursday, with BJ and Tyler each picking up checks for $500,000 from "Race" host Phil Keoghan.

And you could say Ray and Yolanda won big despite their third-place "Race" spot.

Ray shocked Yolanda by proposing, live, on his knees, in the plaza Thursday.

"I think the race was, I mean, it was a once in a lifetime experience," Ray said, "and I mean, you got to hang out with hippies and frat boys but, most of all, sharing the race with Yolanda. It was something that was special. I would have not been here if it wasn't for you and you're like everything I've dreamed of my whole life. Will you marry me?"

With onlookers cheering wildly, she said yes, tears streaming down her face.

Everybody then had cake and toasted the thrilled couple.

When Phil presented BJ and Tyler with their checks, he said they "really embraced this race. They enjoyed every single moment they were on this race, whether they were in first or in last. They kept their spirit all the way to the end. ... And you have a $1 million between you. Do with it whatever you want. Maybe look at getting, you know, a stylist or something!"

Phil was referring to the long-haired, bearded, shaggy look both "hippies" embraced throughout the race, and again in the plaza Thursday.

BJ showed up wearing a purple pirate's outfit, kiddingly saying, "This is just how we dress now. We're rich. And we're not going to hide it."

Tyler joked that he wasn't surprised they won because, "Before the race we TiVoed the last episode and saw that we won. So it wasn't a surprise to us."

He added: "The No. 1 goal for us was to finish the race. Winning was going to be a bonus ride." But BJ disagreed, noting: "We wanted the full experience of 'The Amazing Race.' And the way to make that the most full is to win."When co-anchor Rene Syler asked Eric and Jeremy what happened to them during the competition, Jeremy conceded: "Oh, man. The brains (the hippies) came in (at the flag challenge, which wrapped up the race), and that's where we just failed miserably. They got the brains. Obviously, we can run faster than them. But, man, then it comes to brains, me and Eric are just lost right there."

Added Eric: "We just blew it. We had a chance and we really just messed it up. We can't blame anybody but ourselves. Good job for the hippies."

Ray said taking part in the race "strengthened our (his and Yolanda's) relationship. We get an opportunity to see the entire world with someone you care about and go places you dream of. And places you don't even dream you ever will be. And be with someone that you care about. I mean, that's an amazing experience in and of itself."

Yolanda agreed, saying: "It's weird when you really want to be in the front and then you're not in the front. But you just have to focus on the good times, how fun and exciting the race is and just stop worrying about coming in first all the time."

"The race definitely does that," Phil said. "With the relationships, it definitely tests them. Obviously, emotionally, (the teams) are going to a place that they've never been to before. We saw that with these guys, certainly.

"I just love when we have that real contrast. Eric and Jeremy, BJ and Tyler, Ray and Yolanda. The three teams that we had at the end are so completely and utterly different. From the best legs ever on 'The Amazing Race' (he meant Yolanda's) to two guys who are completely consumed with finding hotties around the world (Eric and Jeremy) to two other guys who haven't seen a shaver for goodness knows how long (BJ and Tyler)."

For details on how the final episode played out, click here.

To learn how the final three teams reacted in the episode to the race's end, click here.

To visit the official Web site of "The Amazing Race 9," click here.

As that site put it: "After nine countries, 59,000 miles, and two close calls with elimination, best friends BJ & Tyler won a seesaw battle against rivals Eric & Jeremy to claim the one million dollar prize. From Japan to Alaska and back to Red Rocks Amphitheatre in Colorado, the two Teams traded positions as they had throughout the Race until BJ pulled ahead of Eric at the final Roadblock to score his Team a victory. After a series of navigational woes, dating couple Ray & Yolanda finished a distant third."

BJ Averell, 26, is an online tutor from Los Angeles. His best friend, Tyler MacNiven, is a filmmaker from San Francisco.

Jeremy Ryan is a 26-year-old valet, and his friend Eric Sanchez is a 27-year-old waiter. Both live in Fort Lauderdale, Fla.

Science teacher Yolanda Brown-Moore, 27, and attorney Ray Whitty, 31, both of Chicago, were dating when "Race" was taped. Now, they're engaged!