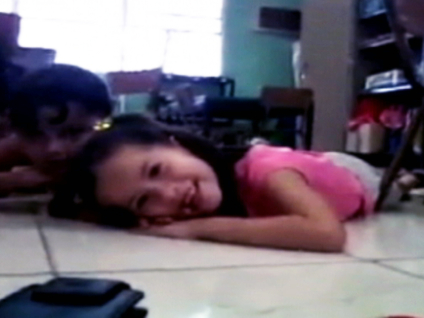 Marta Rivera Alanis, a 33-year-old kindergarten teacher and mother of two, received a special recognition from local Mexican authorities for her heroic action calming her 15 pre-school-age students during a gun battle which raged outside her classroom Friday.

The incident occurred Friday at a school in Monterrey, 140 miles south of the Texas border and once one of the safest, most prosperous cities in Mexico.

But in recent years, drug traffickers have been settling into Monterrey's posh neighborhoods, changing the tranquility of the city.

The video Rivera shot from her Blackberry while a shootout between rival drug cartels took place outside her school has now gone viral.

In the video her confused students ask what is going on; she asks them to keep their heads down, then says peacefully: "What, darling, no, nothing is going on."

As the shots get louder and machine gun fire ricochets outside, she asks them if they'd like to sing a song, then leads them in singing a song by the TV character Barney.

The shootout left five dead. None of the teachers or students at Rivera's school was injured.

Rivera told reporters she started singing to her students from the heart and that she never imagined the video she took would become such a hit. She also told CBS News she isn't worried about her newfound fame amid Mexico's narcotics-fueled violence.

"I'm not scared. But surprised under the circumstances and the attention. Many people in Mexico are discouraged due to what's going on here. But there are many people like me in this country - and even better people than me."

Rivera - who belongs to a Security Committee for Teachers - told reporters that at the time she took the video she thought she'd be able to show it to her security trainees. Without really thinking, she was following the Nuevo Leon State security manual.

She uploaded the video on her personal Facebook page, and then one of her friends uploaded to a local blog, where it went viral.

During the ceremony earlier today she told reporters she was very proud, and said all teachers in the Monterrey area have been trained to deal with these kinds of situations.

She also said she wanted to continue working.

"I love my work. I would like for all of us to do a better job. I want a better Mexico for my kids. I know we can achieve many things."

Since President Felipe Calderon took office in 2006 and declared war on Mexico's increasingly ruthless drug cartels, more than 30,000 people have been killed.